View Profile
The stellar cast and team of movie makers involved with this upcoming venture Zindagi Na Milegi Dobara had been an instant hit with the anticipating audience. That, added to shooting in the wilderness and European locales of Spain, as well a first look at the poster with the 'headless' boys had certainly raised the hype.

However, will all the promotion procedures that are already in place for the venture from the Akhtar siblings, the poster released some weeks ago brings home for the movie its first bout of major controversy - which by the way, as norm goes, is just another means to publicity these days! 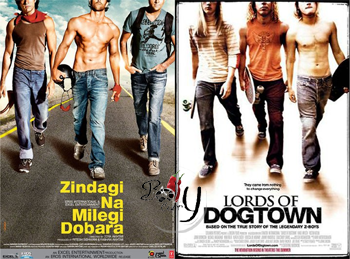 For the record, the poster, as has been revealed (with supporting evidence as seen in graphics) can be nearly accused of being a copy. Not precisely, as you may spot subtle differences, but one can certainly not disagree with how striking the similarity of theme and outlook between the two is - one of the said Bolly project, and other of Columbia Pictures' 2005 production based off a true life story, titled Lords of Dogtown.

Comments from the production house and direction team have not been received for now, but we reckon someone who matters will go on record and say what's going to be done for correction.

For the uninitiated, the last time such a controversy arose, it was in concern with Ranbir-Priyanka starrer, Anjaana Anjaani, which had been resolved by officially changing the first released look of the movie.

Here's hoping that the controversy is dealt with and the movie lives up to all the hype!