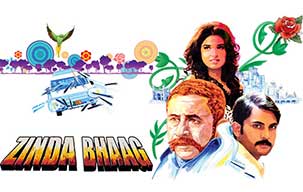 Basking in the success of her film "Zinda Bhaag", Pakistani filmmaker Meenu Gaur Thursday said roping in Bollywood veteran Naseeruddin Shah was a "conscious decision" as he is quite popular in her homeland.

Naseer plays an important role in "Zinda Bhaag", the first Pakistani movie to be sent for the Oscars in the last 50 years.

Gaur, who co-directed the movie with Farjad Nabi, said the move has paid off because Naseer graciously accepted to train the amateur cast of the film.

Naseer's workshop helped polish the skills of the amateurs for the "very realistic" film.

"It paid off before the movie was ready because of the experience of working with the legendary actor," she added.

Gaur is in the city for the screening of her film at the ongoing 19th Kolkata International Film Festival (KIFF) which began here Sunday.

"He is really loved by Lahorians and he brings his theatre there off and on and yes, it was a very conscious choice. Young filmmakers all over the world want Naseeruddin Shah because we have all grown up in the parallel cinema of India and we are familiar with it," she said.

"Zinda Bhaag" will be screened Nov 16. The movie speaks the mind of the modern youth in Pakistan through three 20-something men, who wish to make a living anywhere but in their own country and their city Lahore.

Gaur lauds Naseer for giving their script a shot despite it being sent to him without any recommendation.

"He is such a gracious person...we didn't know him we just sent him the script on email he didn't know who we are and from across the border. How many great actors you know would read a script that just arrives without any recommendation. He called us back and said I loved the script and I would like to work," said Gaur.