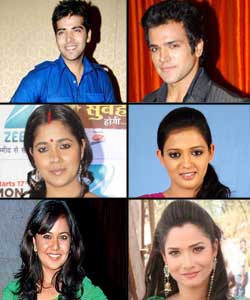 The dance floor of Zee TV's DID L'il Masters is blooming with some of the amazing dance performances. The upcoming episodes of the show will witness the stars of Zee TV shows' performing with the little dancing stars.

Tellybuzz got in touch with Kinshuk who is performing with Om on a funky Bollywood number. He said, "It was fun to dance on Pungi with Om. It's a nice Bollywood number that we did."

We also got in touch with Narayani Shashtri who confirmed the news saying, "I have performed on a contemporary dance style with Shalini. We got good comments as well as it was amazing to perform with Shalini. She is a brilliant dancer."

RBAA 8 years ago Ankita love your performance you are my angel.

Ragvir_Prishna 8 years ago Love you Kinshuk Mahajan my Kinnylicious Rockstar, can't wait for your performance. I am eagerly waiting to see your Performance, love you Kinshuk.

Jade0001 8 years ago Kinshuk Mahajan
Loveee you sooo much

RBAA 8 years ago Ankita you looking gorgeous.
Eagerly waiting for your performance.
God bless you.

yogi24 8 years ago ANKITA u r so gorgeous and lovely in white dress at DID...gud morning

RBAA 8 years ago Love you Ankita
Waiting for your performance. You are the best.