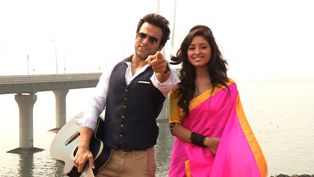 Telly-fraternity's most celebrated award show - Zee Rishtey Awards 2013 will soon be telecast on Zee TV. While the actors prepare themselves to put up a great show, they also visited many cities in India to shoot for a Nomination Special episode of the show which will be aired on November 9th from 7 - 8 PM.

Beginning their journey with Mumbai, Rithvik Dhanjani and Asha Negi (Arjun and Purvi of Pavitra Rishta) were spotted shooting at chawls and Nariman Point in Mumbai. Visiting a house in the chawl, the two were welcomed by an old lady with a platter full of marathi delicacies like poha, jalebis and other savories. In the evening, the two headed for a tanga ride at Nariman point and were greeted with a lot of fans who said that they loved the two as a couple on the show. The two asked all their fans to vote for their show, Pavitra Rishta, which has been nominated in the category of Favorite Dharawahik (Show)'. 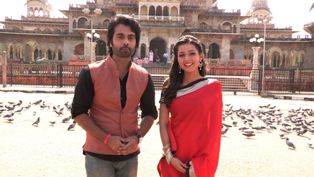 Heading west was Jaipur's favorite couple - Arhaan Behl and Mansi Shrivastav (Raghu and Shivani of Do Dil Bandhe Ek Dori Se). The two were seen having a gala time as they strolled around the town and enjoyed their camel ride and authentic Rajasthani food like mirchi bhajiyas and lassi. The two first headed to Albert Hall Sqaure, and then headed to the city to interact with their fans. The two, were welcomed with grandeur on a camel with Rajasthani folk dancers and fans cheering for them.

Heading North was television's most chirpy couple - Ankit Gera and Roopal Tyagi (Mayank and Gunjan from Sapne Suhane Ladakpan Ke). Being welcomed in the city Nawabi  style, there was band bajaa, aarti and a lot of fans who cheered as the two landed in the city. Heading to the Lucknow special - Tunde Kebab, Roopal and ankit were seen having a lot of fun while roopal was given the task of preparing parathas for Ankit which ended up being burnt. The two later interacted with their fans and requested their fans to vote for them as they are nominated in the Favorite Jodi (Pair)' category. 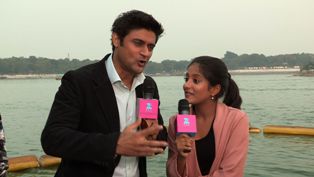 Completing the journey in Ahmedabad were Manav Gohil and Ulka Gupta (Sanjay and Ami from Khelti Hai Zindagi Aankh Micholi). Welcomed in royal gujju style with dandiya raas and garba, the two headed to Goyal society where the residents were thrilled to see and interact with them. They visited a family in that society where members expressed that just their family is just like the parivaar shown in Khelti Hai Zindagi Ankh Micholi. Sanjay and Ami played fun games with their fans like saree draping, dhokla eating etc.

They also shopped at the famous and concluded their day expressing their joy of visiting Ahmedabad.

7 years ago Arhaan and Mansi are the best.. DDBEDS rocks !!

+ 2
7 years ago arhaan and mansi look good together.. they doing a wonderful job

7 years ago Love you Asha Negi and Rithvik Dhanjani

All the best for nb6

7 years ago However much you may be slighted by Zee, Asha Negi and Rithvik Dhanjani- just know that you both are simply the best and better than all the rest!!

+ 3
7 years ago Do Dil Bandhe Ek Dori Se is a beautiful love story. Not that tybical one of hero and heroine. It is love of family and respect rituals. Arhaan Behll and Mansi Shrivastave are doing a gr8 job ar Raghu and Shivani.

7 years ago Arhaan and Mansi are looking great together :)

sarina0626 7 years ago Pavitra Rishta and Arjun have to win! I just wish Asha Negi got nominated as popular face female and best jodi with her better half.

+ 3
7 years ago Arhaan Behll and Mansi Shrivastav are a dream couple , very attractive and goodlooking. They rock as Raghu and Shivani in Do Dil Bandhe Ek Dori Se.