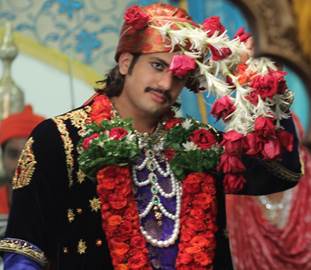 Rajat Tokas - who is currently essaying the role of Akbar in Zee TV's flagship historical show Jodha Akbar, will soon be getting married to his fiance - Srishti Nayar. The two met through common friends and connected instantly and got engaged last April. The two will exchange sacred vows on 30th January at Udaipur Palace. All the functions will commence from January 27. The mehndi and sangeet will take place on January 29.

On a wedding break of about 10 days, Rajat will complete his shoot of Jodha Akbarby the 25th January and will leave thereafter for Udaipur. Completing his wedding functions by 30th January, Rajat and Srishti will be out on their honeymoon for a week post the wedding. With him going on a ten day break, he is working extra hours to ensure that he completes his portions before he leaves. Apart from that, the makers of the show are also planning to concentrate on Salim (played by Ravi Bhatia) and Anarkali's (Heena Parmar) love angle. The two currently share a love and hate relationship in the show's track. While Salim is yet to find out that Anarkali is none other than Nadira, who was responsible for him being sent away into a training school by Akbar, Anarkali will soon deny marrying the match her mother chose for her and will instead set out in search of Qutub - the love of her life.

Apart from Rajat, Chetan Hansraj, who plays the role of Hyder in the show, will also be in Udaipur for two days - 29th and 30th January, to attend the wedding. Rajat and Chetan share a very good rapport and go horse-riding together in their free time on the sets. When contacted, Chetan said, "Rajat will be off for his wedding starting from 26th January and before he leaves, we are all planning a bachelor's party for him on the sets. I will then join him in Udiapur for his wedding on 29th and 30th."

We wish the soon-to-be-married couple all the luck and hope his fans don't miss him too much while he is away.

RaJaT Tokas, U R the best..

6 years ago Mubarak ho Rajat,heres wishing you a long and happy married life