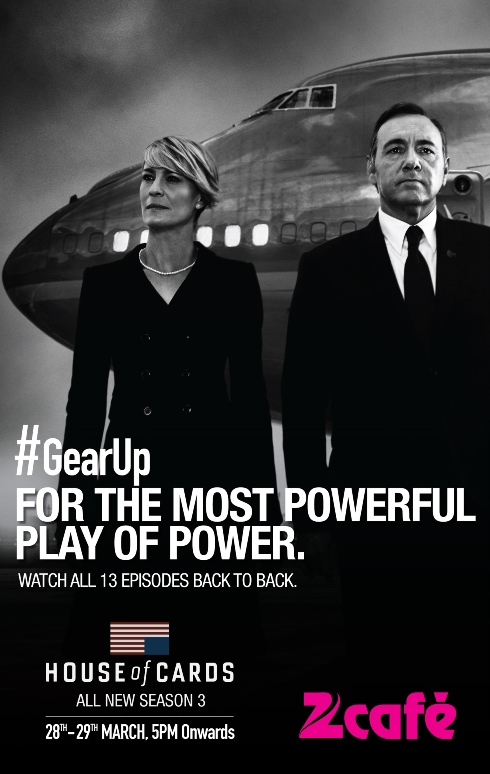 Whoever said too much of anything is bad, clearly didn't know how to binge on TV shows. After months of anticipation, everyone's favorite power-hungry, fourth-wall-breaking politician from House of Cards will be on Zee Cafe, not just for an hour but hours in a row!

House of Cards is back and how! Zee Cafe will be airing all 13 episodes of the latest season (Season 3) of House of Cards, the popular political drama, on 28th & 29th March, 5 p.m. onwards.

This is the first time ever that an English GEC is telecasting all the episodes of the latest season at one go- a strategic move to address the Indian viewers' desire to binge watch several episodes instead of having to wait a week to see another installment.

House of Cards Season 1 & 2 on Zee Cafe received tremendous response from the Indian viewers breaking all records and now with the marathon telecast, the anticipation for the third season will be highly justified.

This unique concept adapted by Zee Cafe is part of a new programming innovation that will showcase latest new shows in a marathon format. House of Cards is the maiden show in this offering with several more exciting shows lined up for the upcoming year.

Speaking on the concept, Head - Content & Marketing of Zee Cafe, Sharlton Menezes stated, "House of Cards already ranks among the most influential series in television history. The marathon of Season 3 on Zee Caf is sure to give the channel the viewership clout and further transform how the audience watches and defines television'. With this, we aim to leverage this insight by adding value to an Indian viewer's individual experience."

The proposition for House Of Cards S3 marathon is #GearUp which will be integrated in all of Zee Caf's communication across platforms - On-Air & Digital, thus focusing on the idea to highlight the ingenuity of this programming format which has been derived from the viewer insight that people hate waiting for episodes of their favorite shows on a weekly basis.

The butchery begins again. Are you ready?

9 years ago 2D to 3D Conversions are perfectly fine.
I would like to see movies like Devdas nad Veer and Zaara 3D, as the beautiful colours and dance will stand out so good