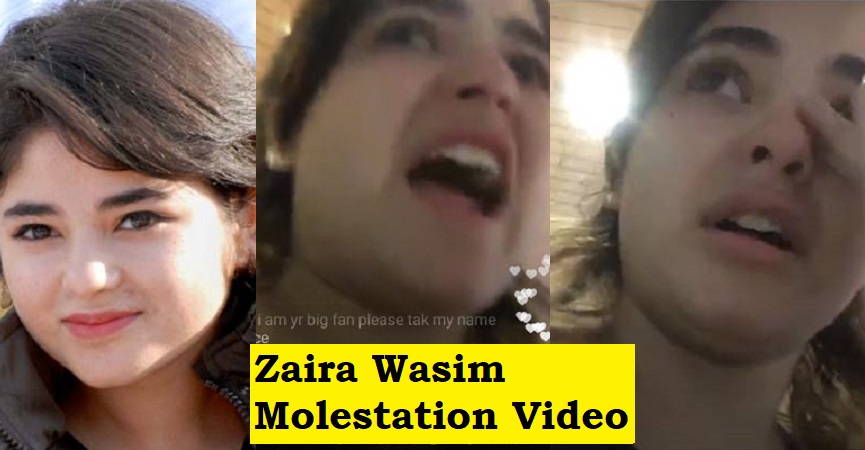 "Dangal" actress Zaira Wasim has detailed a harrowing experience of being allegedly molested by a middle-aged man while she was on a flight from Delhi to Mumbai. Women commissions have urged her to file a police complaint.

The 17-year-old National Award winner shared her ordeal on a Vistara Airlines flight on Saturday night via Instagram.

She shared a snapshot of the man's foot which was rested on her arm rest and detailed her experience of how the man "kept nudging my shoulder and continued to move his foot up and down my back and neck".

In a self-shot video for Instagram live chat, Zaira, who is from Jammu and Kashmir, is also seen breaking down.

"I just landed, the whole irony of this that I yelled... and this is not done... this is not how you should be treated or made to feel. This is terrible. This is how they will take care of girls? No one will help us if we don't decide to help ourselves and that is the worst thing," she said, looking visibly disturbed.

The National Commission for Women (NCW) as well as the Delhi and Maharashtra commisions for women on Sunday urged the actress to approach the police.

"I am taking suo moto cognizance and giving notice to Vistara and a copy to DCP Maharashtra to act against the airline. We would like to tell Zaira that we are there to help her out in any way we can," Sharma told the media.

Swati Maliwal of the Delhi Commission for Women (DCW) also condemned the incident.

"Urge Zaira Wasim to file police complaint. Accused should be arrested. Since flight was from Delhi to Mumbai, the DCW is issuing notice to Vistara Airlines seeking details of man, action taken by airlines and SOPs (Standard Operating Procedures) followed in such matters. Now even flights are unsafe for girls," Maliwal tweeted.

Calling it a "shameful incident", Maharashtra State Commission for Women (MSCW) Chairperson Vijaya Rahatkar said: "MSCW will direct DGCA (Directorate General of Civil Aviation) to conduct an inquiry in the matter. We will inquire into the steps taken by Vistara to address the complaint.

"There should be inquiry about why the cabin crew did not help her. We have directed the Mumbai Police to look into the matter immediately."

Vistara Airlines has said it will investigate the issue.

"We have seen the reports regarding Zaira Wasim's experience with another customer... We are carrying out detailed investigation and will support Zaira in every way required. We have zero tolerance for such behaviour," read a post on the Airlines' official Twitter page.

The airline apologized to Zaira and said it was carrying out a detailed investigation.

"We will support Wasim in every way required and also if she decides to report this matter to the police... We apologize for what Wasim experienced and we have zero tolerance for such behaviour," read a post on the Airlines' official Twitter page.

Former Jammu and Kashmir Chief Minister Omar Abdullah said the passenger should be identified by Air Vistara and a case should be filed.

+ 2
3 years ago I wonder if the action would be so prompt if this was an ordinary girl!!!!