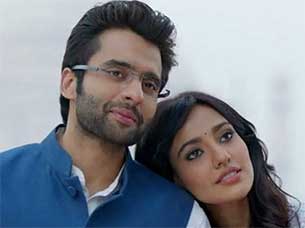 Actors Jackky Bhagnani and Neha Sharma visited the Siddhivinayak temple here to thank god for the success of their film "Youngistaan".

"This is a prayer to just thank god for everything. May more people watch the film and it becomes a bigger success. We always come to god before a film's release but we have come to say thank you (now)," Jackky said here Tuesday.

Jackky, the film's lead actor, is happy with the audience's appreciation of the movie.

"It's been great...we have received good reviews. The biggest thing is that people are enjoying the film because we make films for them. If they like the film, we feel really happy," the 29-year-old actor said.

The film released March 28 and seems to have broken the dry spell for Jackky who has been struggling to make a place in Bollywood since his first release "Kal Kissne Dekha" in 2009.