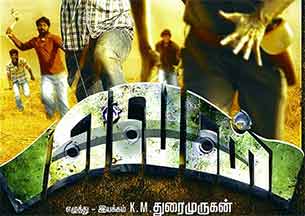 The makers of upcoming Tamil thriller "Yevan" have spent a lavish Rs.15 lakh to recreate a set of a slum to shoot a song. Popular singer Gaana Bala has crooned this number which revolves around modern day relationships.

"We were supposed to shoot this song during day time, but Bala insisted we shoot it at night. We spent about Rs.15 lakh to create a set of a slum and filmed the song in it," the film's director K.M. Durai Murugan, told IANS.

"Bala is known to write and croon songs that take a dig at women, but this time he avoided all that and instead wrote about modern day relationships," he added.

Some portion of the film was shot in a dense forest in Tamil Nadu.

"We shot in a forest in Thiruvannamalai. When we went to shoot there, we were warned by the local tribes about how giant honeybees have been causing a lot of problems for them. We decided to shoot there despite the warning and eventually some of us actually got bitten," he said.

"Three of us had to be admitted to the hospital. We somehow managed to finish shooting the next day with some safety measures," he added.

The film features Dhileepan Pugazhenthi and Deepti Manne in the lead roles.