Pakistani singer Adnan Sami, who has his base here, admits that he is tying the knot for the third time -- this time with Roya Faryabi, qualified engineer in Munich, in Europe Jan 31. 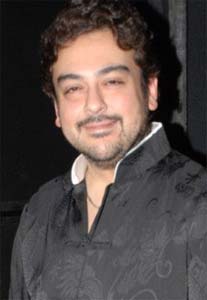 Featured Video
my family members and all of Roya's family are going to be at the wedding. I'd like all my friends from Mumbai to accompany me to Europe for the wedding. Unfortunately, there's no time for them to make travel arrangements. So I'll have a large wedding reception in Mumbai as soon as Roya and I return after the wedding,' Adnan told IANS.

At the moment, Jermaine Jackson and his wife are on the guest list.

Talking about his second wife Sabah Galadari, he said: 'According to Islamic marriage laws, she was technically never my wife at all. Even if she was, my religion permits me to have three wives.'

'I was going through the worst phase of my life when I met Roya. I lost my grandfather, then my father. She held my hand during my darkest hours while I was fighting the ugliest court battle with my former wife.'

'Roya is very family-oriented. More than the fact that she loves me, I love her for understanding the importance of family ties. Roya respects my mother. This is something I didn't have in my earlier marriage.'

Most important of all, Adnan's son Azaan gets along like a house of fire with his new stepmom-to-be.

'The most important criteria for me in any woman is that she has to get along with my son. While Sabah couldn't get along with Azaan, Roya loves my boy. In fact, they are best friends and I'm often the brunt of their jokes.'

Happiness has come to Adnan at a time when he had hit rock bottom on a personal level.

'I wouldn't say Roya came into my life suddenly. We got to know each other gradually. After having gone through what I have, I was in no mood to jump into a new relationship. But it didn't take me long to realise she was the woman I wanted to spend the rest of my life with.'

Roya will move to Mumbai with Adnan right after the wedding.

'She is a qualified engineer in Munich and works in the communication services. The organization has branches all over the world. They're looking at opening a branch in Mumbai now that Roya is shifting to the city,' said Adnan who wants his wife to continue working after marriage.

'Isn't it enough sacrifice that she's leaving her family behind to join me in Mumbai? I don't want her to give up her career,' he said.