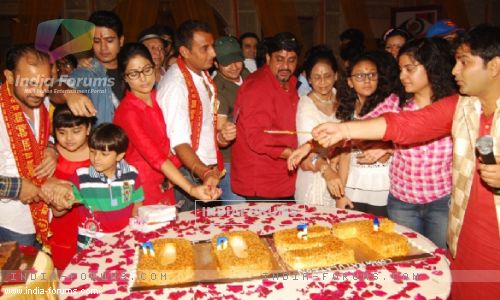 The entire team of Rajan Shahi's much loved long running show Yeh Rishta Kya Kehlata Hai on Star Plus has got a reason to celebrate as the show has achieved a milestone of 1500 episodes.

Our source says, "A Havan was performed on the sets followed by a cake cutting in which the other actors from the Director's Kut family like Neha Sargam, Adaa Khan, Navi Bhangu, Kanchi Singh, etc. too joined in. Hina Khan was seen doing a Garba to celebrate the happiness of completing 1500th episodes."

jyoti_Rahira 6 years ago congragulations for the entire team of yrkkh

-Sadiaa- 6 years ago Congrats to the entire team !
Hina Khan is a gem !

sanw 6 years ago This is a big achievement. now waiting for the 2000 episode celebration

The_Fan_Girl 6 years ago 1500 Episodes Celebrations Was Fantastic..All Actors Did a Super Job

Thanx To Rajan Sir & Whole Team Of YRKKH For Their HardWork