Well known Bollywood filmmaker Yash Chopra has expressed concern over the lack of cinematic exchanges between India and France and said he would try to improve this by facilitating the release of French films here.

'France and India have to do a lot more together. Through the exchange of our cinemas, stronger bonds can be built,' said Chopra who over the weekend was conferred France's highest civilian award, th 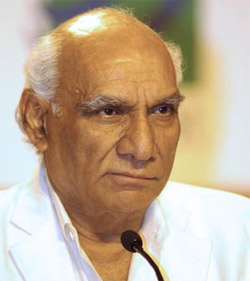 'I am aware that the Indian government is trying to sign a treaty to facilitate such exchanges but we need to understand that films are not only about business. They are first works of art.

'Films are not made by the government but by individuals and so I will surely offer my services to release French films in India. Please, I would request the French government to allow Indian films to go there,' Chopra added.

Chopra, who heads Yash Raj Films, one of Bollywood's largest production houses, said: 'French cinema has given some very pathbreaking films to the industry. There are some wonderful filmmakers there. It will be great to liaison with them.

'We (Indian filmmakers) love French cinema and we don't get to see much of it here. So I request the authorities to do something so that we can release our films there with French subtitles and vice versa.'

Chopra, who has churned out blockbuster films like 'Dag', 'Deewaar' and 'Dil To Pagal Hai', also suggested organising of scriptwriting workshops.

'I suggest that we must try and get together to hold a two-month script workshop in Mumbai. French writers are brilliant and unconventional and such an initiative would surely help all young, aspiring filmmakers to learn a lot.

'What we lack in our country is good scripts and ideas and I hope through some workshops, we will be able to improve the situation,' Chopra maintained.

'I also think that an Indian film based on France should be shot,' he added.

CINTAA ties up with Zindagi Helpline for combating suicides, empanels ...