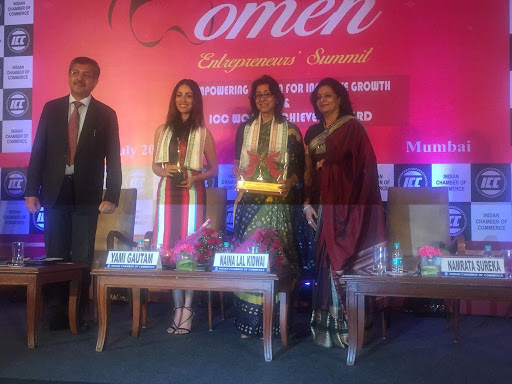 Yami Gautam will be felicitated as 'Young Women Achiever' at the Women Entrepreneurs Summit 2017 organised by The Indian Chamber of Commerce (ICC).

Recognising her work, they have invited her to felicitate her achievements in showbiz

The actor will be receiving the award by Mr. Aditya Agarwal, Director, Emami and President, Indian Chamber of Commerce.

Yami Gautam has made good strides in Bollywood. Hailing from Chandigarh and being considered an outsider in the industry, she has carved a name for herself and performances have been appreciated by the audiences across boundaries

She has come a long way ever since her 1st movie, Vicky Donor, capturing audiences with her performance. People were in complete adulation of her performance in the latest movie Kaabil where she touched the hearts of many with a natural performance of visually impaired girl

Indian Chambers of Commerce was founded in 1925 and has most prominent industrial groups of India as its members. It's also the founder member of FICCI.

Being felicitated by one of the most proactive and forward-looking chambers in the country, it is a huge honour as she provides inspiration to a lot of women to work their way to achieve thing.

Smriti Khanna And Gautam Gupta are all Praises For Radhika Madan

Rishina Kandhari talks about resumes shooting, her perfect ...
8 minutes ago

Ye Rishta Kya Kehlata Hai: Kartik to take care of his ...
19 minutes ago

Sushant Singh Rajput fans gear up for a second round of ...
19 minutes ago

Sushant’s Brother-in-law Messaged, ‘Please Keep My Wife Away ...
29 minutes ago

Tinaa Dattaa to make her digital debut with 'Naxal'!
43 minutes ago