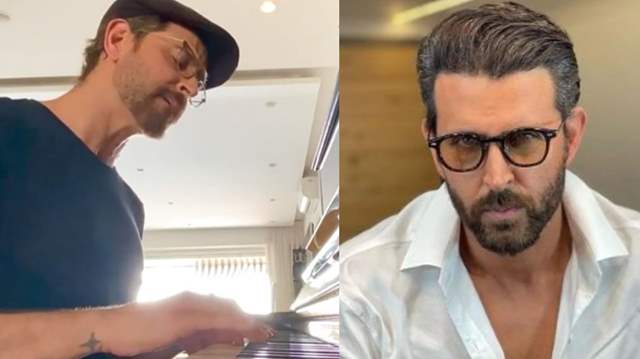 Hrithik Roshan is unquestionably one of Bollywood's most prominent performers. Everything about him, whether it's his acting prowess or his attractive looks, wins the hearts of his followers.

Aside from his acting chops, the actor has also astonished us with his musical talents. The Greek God of Bollywood possesses a melodic voice. The actor has always astounded people with his flexibility, and this time he has given his admirers a fantastic treat.

On the occasion of World Music Day, the actor came to social media and sang his favourite song, 'Tere Jesa Yaar Kahan,' while tuning up his piano. The actor appears terrific in his full beard and moustache while sporting his cap and eyeglasses.

You can see the video here

Hrithik Roshan moved his hands quickly on the keyboard like an expert. Hearing this ancient gem in Hrithik's voice was indeed a wonderful delight for his followers. Sharing this video, the actor wrote in Hindi, “मेरा पसंदीदा गाना".

Netizens are going in a frenzy after seeing the video of singer Hrithik. For the unversed, the actor has provided his voice to several songs in real life, including Kites in the Sky (Kites), Senorita (Zindagi Na Milegi Dobara), and What a Wonderful World (Guzaarish).

Meanwhile Hrithik has two major projects for this year. He will soon begin training in martial arts for his film Fighter which also stars Deepika Padukone. This will be the first time this duo will share the screen space. Hrithik recently wrapped up filming Vikram Vedha. He also shared a post regarding the same on his social media handle and thanked the director, and all the cast and crew members for their love and support. Vikram Vedha also features Saif Ali Khan and Radhika Apte in key roles.