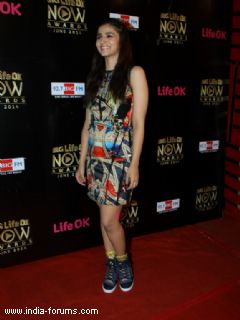 Actions speak louder than words and in this case, Alia Bhatt has said quite a lot already! The princess of tinsel town had just limped her way onto the sets of the BIG Life OK Now Awards with an injured leg that she had to begin rehearsing too. But Alia showed not even a hint of uneasiness!

Being the face of the BIG Life OK Now Awards June 2014, Alia Bhatt and Varun Dhawan put up a special curtain raiser performance to their upcoming movie! For a particular gag, the Humpty Sharma Ki Dulhaniya also went down on one knee with great difficulty to propose to her dulha! Well, with a serious calf injury and all the hopping and limping, Alia clearly stated that work for her, comes first indeed!