View Profile
Wearing a black dress with some little floral patch and topping it up with minimal make up and a light pink blush to the cheeks, Tamannaah Bhatia looked gorgeous and fresh even in the early hours of the day. Welcoming us with her broad pink smile she began with her interview. 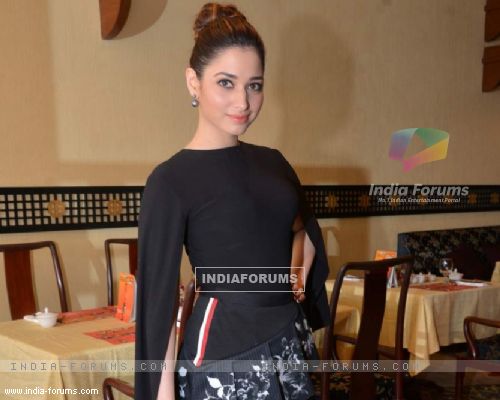 How does it feel to be a part of a film like Baahubali?

It's a very prestigious thing for me, I feel very proud and lucky that I have been selected from among so many people to play this character. Each and every woman character, are all three very strong female characters given in this film. I have out notched mostly an action kind of role. I am doing a lot of action in the film which is new for me. Basically this film is very visually driven. There are not many dialogues, but the emotions these characters portray are very basic human emotions and that makes it palatable for any kind of audience because it's not very culturally bound, its essentially a very Indian film.
You have done strong female roles in Telegu cinema so would you like to do a complete women centric film in south or the Hindi cinema?
Yes, if something interesting comes up, but I think women centric films can't be made just like for the sake of it. They have to be palatable to a large audience. Like there's been Queen, Kahaani; these Hindi films have a lot of meat for the female. It's basically female driven but at the same time it's very acceptable to a large section of the audience.
Do you have a romantic track in the film?
Yes, I am romantically paired with Prabhas in the film. Prabhas plays two roles in the film. He is Shivudu and Bahubal; they are father and son. So I am paired opposite Shivudu.
How is Rajamouli as a director?
I have never met a person like him. If I want to be like anybody I want to be like Rajamouli because he is somebody who strikes a balance between his personal life and his work. His family has actually helped us in making the film. Like the first AD on the set was his son, the music director is his cousin brother, line producer is his cousin brother's wife, and the costumes are run by his wife and a family friend. So it's basically an entire family trying to make a film. If they weren't there, this film couldn't have been made. He is somebody who inspires me. He puts efforts without actually looking out for a reaction. He is more involved in creating than what the reaction to the creation will be.
Karan Johar is representing this film, so how important is it?
It's very important because the scale on which this film is made, no other war film has been made on this large scale. The type of visual effects that are used in this film are never used by anyone before. It's a really expensive film from the perspective of it being regionally made. The kind of money we have spent on it and Karan coming and giving it his name and presenting it to pan India means a lot to us. Only Karan could have given this film, the kind of projection it has got. We were very excited and also reassured that our film is being presented by somebody like him.
Any memorable moment you take back?
For me the entire Mahabaleshwar episode was a completely new experience because I actually shot in rainfall and the whole day standing in the rain and just doing your thing. I have never been so alive on sets. Even when I was in front of the camera there was a lot going on inside me. Experiencing that entire weather and ambience and it was like a rain forest of sort.
We wish Tammanah all the very best for Bahubali.
Priyanka Chauhan