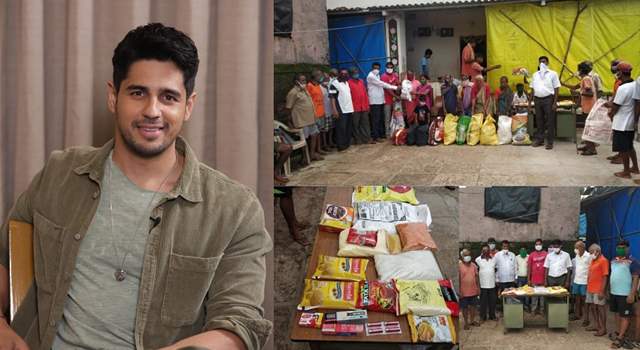 The cyclone Nisarga which hit Maharashtra on 3rd June had affected a lot of districts including Raigad, Palghar, Thane, and Mumbai. Many towns and villages in these districts saw a lot of destruction.

While help has been pouring in, a few places are still affected by the lack of supplies. One such village Dharavali, in Raigad district, has been drastically affected, with the town's electrical supply also being damaged. The villagers have been reaching out for as much help as possible and reconstruct the damage the cyclone has left behind.

Sameer who works as Sidharth Malhotra's spot boy went to his hometown Dharavali during lockdown to stay with his family. When he informed Sidharth Malhotra about the situation in his village, Sidharth instantly decided to help him and the other 110 families in every way possible.

Actor Sidharth Malhotra, who has been trying to do his bit during this time of crisis,  provided the villagers with food supplies and torches with batteries to support them to get back on their feet sooner.

Nilesh Kadu, a villager from Dharavali took to social media to thank the efforts of Sidharth Malhotra.

A lot of places that were affected by the Cyclone Nisarga are still in need of great help even after almost two months of the calamity. With the situation in the country due to lockdown and the destruction from the cyclone, these towns and villages are in great need of our help and support.

Payal Ghosh: If I am found hanging from ceiling, remember I ...
21 minutes ago

Mohsin Khan gets injured on the sets of Yeh Rishta Kya ...
28 minutes ago

Breaking
Breaking Namish Taneja back on ‘Aye Mere Humsafar’ sets after ...
56 minutes ago