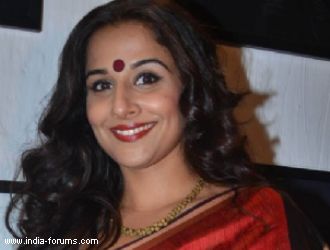 If the success of "The Dirty Picture" has revealed the "sensual" side of Vidya Balan, it has also left her superstitious about the colour red. That's one reason she insisted on a red sari for her item number in "Ferrari Ki Sawari".

The 33-year-old, who became a rage after portraying the bold and beautiful Silk in "The Dirty Picture", will be seen in a Lavani item number "Mala jau dya na ghari" in Vidhu Vinod Chopra Productions' "Ferrari Ki Sawari".

According to sources, Vidya insisted on being featured in a red sari instead of the traditional green attire for the Lavani number.

Confirming the news, director Rajesh Mapuskar said: " 'The Dirty Picture' was such a huge hit that she feels that red is her lucky colour. The result is looking fantastic."

Vidya, who sizzled in a red hot sari in the first teaser of "The Dirty Picture", feels people were unable to picture her sensual side, and so she was never offered an item number before.

"I don't think anyone could believe that I could be so sensual. I am still not a dancer. But I have begun to enjoy dancing more so," she said.