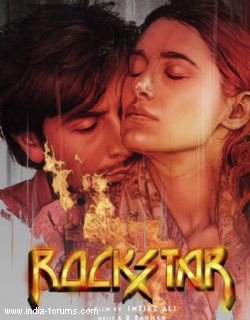 New Delhi, Nov 7 Ranbir Kapoor's role as the reluctant but ruthless politician in hit political thriller 'Raajneeti' earned him a lot of praise, but his 'Anjaana Anjaani' failed to garner the same response. Now the young actor is hoping to make a mark with 'Rockstar', releasing Friday, where his character goes through various shades.

For the film, he teamed up with young director Imtiaz Ali, known for making films like 'Jab We Met' and 'Love Aaj Kal'.

The musical drama with Delhi as its backdrop tells the story of Janardhan Jakhar (Ranbir), a Jat boy living in the middle-class locality of Pitampura who dreams of becoming a famous rockstar like Jim Morrison.

He tries hard to prove himself as a singer but instead of appreciating him, the audiences ridicule and humiliate him. While contemplating his failed attempts, it occurs to Janardhan that most of the famous musical stars have something in common - tragedy.

So, Janardhan, who is leading a happy life, decides to bear pain to become a well-known singer. He approaches Heer Kaul (Nargis Fakhri), who is rich, beautiful and arrogant. She has broken many hearts. Hoping she will break his heart too, Janardhan starts following her.

The story then moves forward as the happy-go-lucky boy leaves behind Janardhan and becomes Jordan after going through various ups and downs in life. His transformation from a simple naive individual to a tortured soul, from a college campus in Delhi to the international stage.

His fulfils his dream, but in his quest for fame he loses his heart forever.

Ranbir is said to have left no stone unturned to make his character believable on the screen. From learning to play the guitar to staying with a Jat family and from eating at local dhabas to milking cows - the 29-year-old did all to bring authenticity in his character.

Co-produced by Eros International and Shree Ashtavinayak Cine Vision, the film, made on a budget of more than Rs.60 crore, has been extensively shot in Delhi in locations like St. Stephen's College, Connaught Place and Nizamuddin, among others.

One of the songs that mark the turning point in the film has been shot in the Nizamuddin dargah.

Some portions of the film have also been shot in Kashmir, Himachal Pradesh and Mumbai.

Imtiaz also shot the film offshore -- in the Czech Republic and Italy.

The music, composed by Oscar winner A.R. Rahman, is already a rage and the promos of the film have received a positive response.

Ranbir and Imtiaz have been extensively promoting the film with city tours. The team was recently part of the concert where both Rahman and Ranbir performed live on stage for their fans. They are also planning a show in Kashmir and London.

'Rockstar' will introduce two new faces to the Indian film industry -- Pakistani-American model Nargis will be seen for the first time as Ranbir's love interest and it will also launch Brazil based Moufid Aziz, born to parents of Portuguese and Arabic origin.

After 'RA.One', movie buffs are eagerly looking forward to the release of this film, but whether it will be able to strike a chord is yet to be seen.