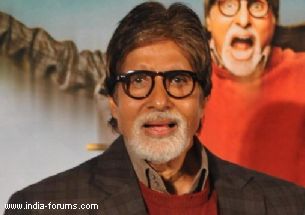 Bollywood megastar Amitabh Bachchan has reportedly been offered a cameo in Shivrajkumar starrer upcoming Kannada film "Kabira", but he is yet to accept the offer.

Incidentally, Amitabh and Shivraj played teacher-student in a television commercial of a popular jewellery brand.

"Since the advertisement turned out to be popular, the makers decided to use the same pair on the silver screen as well. Amitji has been offered the role. He hasn't confirmed yet for the role," a source from the film's unit told IANS.

"Kabira" is a remake of Kannada classic "Mahatma Kabir", which featured yesteryear superstar Rajkumar in the lead.

"It was Shivrajkumar who had requested Amitabh to take up the role of a teacher. They have known each other for a long time and after working together in a television commercial, Shivraj sir felt it would make sense to cast him in the movie," the source said.

The film is being directed by Narendra Babu.

In the past Big B did a cameo in 2005 Kannada release "Amruthadhare", which was a runaway hit.