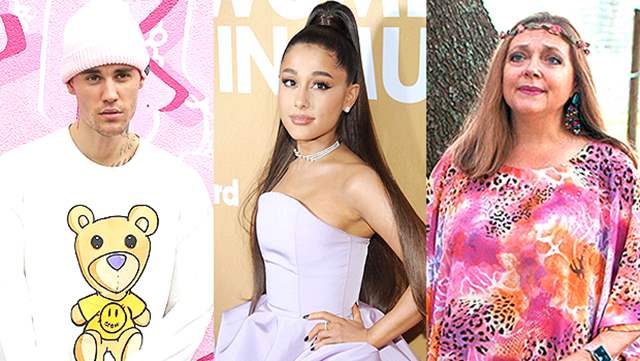 Here's a video that Justin Bieber knew would get attention: Carole Baskin, in a big cat outfit, dancing with her cat and husband to Bieber's song with Ariana Grande.

That is a clip that Bieber tweeted out Thursday night, hours ahead of the premiere of his and Grande's music video for their duet "Stuck With U."

In the 13-second clip, controversial "Tiger King" personality Carole Baskin, the memeified Big Cat Rescue spokeswoman and rival of former zoo owner Joe Exotic, is seen swaying with her second husband, Howard Baskin. The video, which was retweeted by the Big Cat Rescue Twitter account, appears to be one of the many fan-shot videos made in response to Bieber and Grande's ask for fan videos to be included in their crowd-sourced music video.

However, the clip is NOT a part of Grande and Bieber's official music video. Grande made it known on Twitter that she "did not allow or approve" the "Tiger King" couple's inclusion in the final video, but "nonetheless," she said, the video of the Baskins "exists and that’s ..... unique."

The debut of Bieber and Grande's "Stuck With U" premiered midnight on Thursday. Proceeds from the streams and sales of the song will be donated to First Responders Children's Foundation.

Grande wrote on Instagram that this collaboration with Bieber "really means so much more than it ever could have if it had happened any other way or if it had been any other song ... my heart is seriously so full."