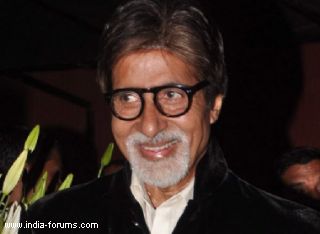 Megastar Amitabh Bachchan wouldn't have thought that he would be compelled to make a backdoor entry into his own house someday.

The first day of the Year 2012 saw a huge crowd gathering outside Amitabh's house Jalsa in Mumbai to see the actor and extend their good wishes and it resulted in traffic jam and he had to make a backdoor entry.

'The family returns from Prateeksha after the Pooja and every car that goes in is received with shouts of recognition... in fact, I have slipped in from the back because the traffic has jammed and I am finding it difficult to enter my own home...,' the 69-year-old wrote on his blog bigb.bigadda.com Sunday.

However, Amitabh did come out to meet and greet his fans along with son Abhishek Bachchan, who, he says, was with the family for the entire day after a long time.

'Abhishek has been able to spend an entire day with us after ages - he being flown in every day to different locations for his promotions for 'Players' releasing in a few days on the Friday - a fast paced slick film with some rather picturesque and daring stunts in some of the more remote regions of the world - New Zealand to the North Pole via Russia...well almost !!' he posted.

Urmila Matondkar Does Not Regret, But Ready to Apologise for ...
9 minutes ago

Shabana Azmi speaks about recovering from her Devastating ...
32 minutes ago

Who is AK in Sushant's Unseen Video that has Surfaced? Watch ...
36 minutes ago