They came, they sang, they conquered!!! And not only that, they convinced one and all that they are here to stay. We are talking about the girls on Indian Idol. And the boys, in true sportsman spirit, cheered them on. 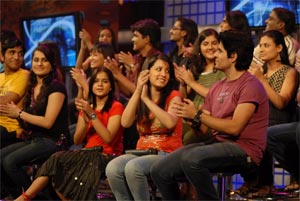 Featured Video
This season, the girls outdo the boys not only in number, but in performance too. They rendered some confident and rocking numbers. Which leads us to the age old question, 'who will win the coveted title of Indian Idol 4 this year?'  Sonali Bendre firmly believes that a girl will walk away with the crown while Javed Akhtar hopes a good singer wins - be it a boy or a girl. Annu Malek, on the other hand, with his keen sense has picked one from the lot - Bhavya Pandit, the first among the singers to get an offer to sing for him in a forthcoming film.

But with laughter come tears. As Saturday dawns, the viewers and the contestants are in for a huge shock. After every singer putting in their maximum effort with round the clock riyaaz, wanting to be a part of Indian Idol 4 with all their heart and soul, 10 of the participants will have the carpet yanked off their feet.

So catch the great singing, enchanting performances and shocking eliminations on Indian Idol 4 this Saturday, November 1st at 9.00 pm only on Sony Entertainment Television.

+ 3
12 years ago i caNOT beleive prasanjit got eliminated...i hope ananya wins shes got a gr8 voice so has tulika...i lyk lots of them
samiya!=)

12 years ago what the heck??..i wont be surprised if a boys wins it...girls always get eliminated no matter how good they sing.