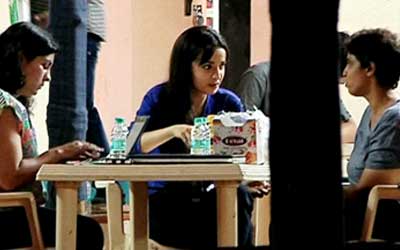 Beautiful and good looking Sanaya Irani who is currently essaying the character of Paro is Colors' popular show Rangrasiya must be reminiscing her old days as she met her old folks Garima and Lata the creative of the popular show Iss Pyaar Ko Kya Naam Doon?

As viewers admire Sanaya for her commendable performance in Star Plus' Iss Pyaar Ko Kya Naam Doon? she was seen chit chatting and sharing a hearty laugh with the creative of the previous show.

Well, as Sanaya was very much attached to the show, she admits that she likes Khushi's character more than that of Paro's character. She also wished that Iss Pyaar Ko... completed the run for more time but unfortunately it went off air.

It's quite nice to see Sanaya meeting and chatting with her old folks!

4 years ago Sanaya Irani love u my princess

6 years ago Oh how I miss you and your portrayal of Khushi. IPKKND will be very special to me now and always. Sanaya when are you and Barun coming back together in a TV serial or a movie. You both create magic on screen. God Bless you, my Princess. Love you so much.

6 years ago I love IPKKND.
Still watching it. No serial
replace IPKKND till now.

6 years ago I never was soo addicted or die-hard fan of any show b4 IPK...n now after IPK i never turned on to SP n actually stopped watching any serial...SARUN/Arshi will always b in my heart...D best Onscreen/Offscreen pair...Wish they were back with IPK... :(

Akihdir 6 years ago We fans not only miss ipkknd but also everyone and everything that's related to it...thats y most of us R still w8ing 4 ipkknd...missing U Barun Sobti and Sanaya Irani...

6 years ago Sanaya irani kudos for you for doing such a lovable character of Khushi so brilliantly and convincingly. You simply did magic in IPK.

6 years ago wow, great to see this bonding.. Sanaya Irani, though you are awesome as paro still missing our khushi..