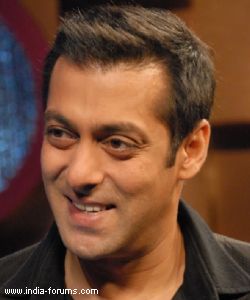 Zee TV's recently launched SaReGaMaPa Singing Superstar will see its first celebrity in Salman Khan, for the Gala round featuring the Top 18 contestants that will be aired this weekend.

Salman who will be present to promote his upcoming flick Dabang will make a sensational entry in the show, thanks to the dance steps choreographed by DID Little Master skipper Jai Kumar Nair.

A little birdie says, "Jai Kumar has choreographed the entry act for Salman Khan; it will feature all the 18 contestants too".

When contacted, Jai confirmed the news and said, "It is a privilege to choreograph for the SaReGaMaPa contestants and Salman. I have prepared two to three movements on the Dabang track for Salman's entry in the show. It was a mind blowing experience to shoot with such an amazing personality".

10 years ago I can't wait to see Salman in other show!

10 years ago yay! love sallu and glad jai got a chance to choreograph him

10 years ago Yayyyyyy love Sallu I cant wait to see him in it. Love love him loads.

+ 3
10 years ago hoep its gonna be on sunday eisode coz sony tv showing best of dus ka dum want to watch both
and i cant record anyof it .. dont have video recorder anymore bhuuuuuuuuuuuuuuuuu