A cursory glance at the list of the highest-grossing Bollywood films of all time causes you to notice the Salman Khan-starrer Kick (2014) in the top ten, which interestingly is an official remake of the 2009 Telugu film of the same name. In fact, some of the other major recent successes at the box office are all remakes - including Jai Ho(2014), which is a remake of Stalin(Telugu, 2006) and Rowdy Rathore (2012), which is a remake of Vikramarkudu (Telugu, 2006). Clearly, Bollywood turns to regional cinema - and particularly Tamil, Telugu and Malayalam cinema - quite often, and to great commercial success! We, at BollyCurry, thought it was time to take a look at other important remakes of regional films.
Tamil Cinema
Featured Video 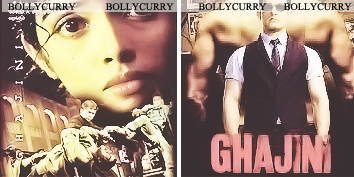 A great number of recent successes at the box office have been remakes of Tamil films.The likes include Singham (2011), a remake of the Tamil blockbuster hit Singam(2010) and Force (2011), which is a remake of the film Kaakha Kaakha (2003). One of the first remakes of Tamil films was the 1957 film Sharada, starring Raj Kapoor and Meena Kumari in lead roles. It is a remake of the 1954 film Edhir Paradhathu. Mani Ratnam's Roja (1992), Bombay(1995) and Dil Se..(1998) were also released in Hindi. It was Ghajini(2008), however, that truly left an impression as far as the commercial success of Bollywood remakes of regional films go. Directed by A.R. Murugadoss (who also directed the Tamil version), it became the highest-grossing film of that year and the first Bollywood film to cross the 100 crore mark. The film opened the floodgates to an increasing interest in popular South Indian films. With the upcoming Akira, it is clear that this interest is here to stay.
Remake you want to consider: Ghajini
Remake in the pipeline:The upcoming Sonakshi Sinha-starrer Akira is scheduled to release on the 2nd of September, 2016.
Telugu Cinema 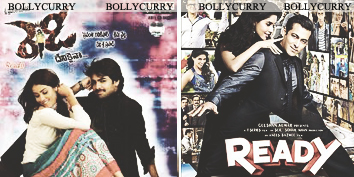 Remakes of Telugu films are also helping Bollywood bring in the audiences. Some films by Akshay Kumar and Salman Khan are prime examples - including Rowdy Rathore (2012), which is a remake of the film Vikramarkudu (2006), and Ready (2011) which is a remake of the 2008 film of the same name. Ready opened to mixed reviews from critics, but it holds the record for being the second highest-grossing film of 2011. The National Award-winning Ek Duuje Ke Liye (1981), directed by K. Balachander, is a remake of the director's Maro Charitra (1978). The highest-grossing film of 2014 and one of the top ten highest-grossing Bollywood films of all time, Kick, too is a remake. Some remakes, however, did not have similar fates. Ek: The Power of One (2009), for example, tanked and received mostly negative reviews from critics, even though the original Athadu (2005) was pretty well received. Nothing, after all, is a foolproof formula!
Remake you want to consider: Ready
Remake in the pipeline: A Hindi remake of Oopiri (2016) is in the pipeline.
Malayalam Cinema 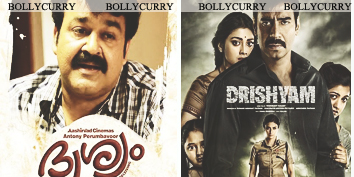 Last year, Ajay Devgn's Drishyam opened to rave reviews. The film is an official remake of what is the highest-grossing Malayalam film to date. Jeethu Joseph's 2013 film was a huge success! Bollywood has frequently turned to Malayalam cinema over the years for good plot-lines, a great number of which are comedies. Bhool Bhulaiyaa (2007), remake of the 1993 film Manichitrathazhu, is a horror-comedy. Hera Pheri (2000), remake of Ramji Rao Speaking (1989), is a cult classic and is considered by many to be one of the finest Bollywood comedies of all time. Priyadarshan has been a towering figure over the years in this field. Many of his cult classics are remakes of Malayalam films, including Hungama (2003), which is a remake of his own film Poochakkoru Mookkuthi (1984) and Garam Masala (2005), which is a remake of Boeing Boeing (1985).
Remake you want to consider: Drishyam
Remake in the pipeline: Hindi remake rights of Salt N' Pepper (2011) have been bought by Prakash Raj.
Kannada Cinema 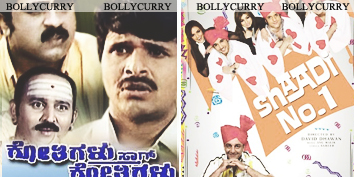 Compared to Tamil and Telugu cinema, there has historically been fewer Hindi remakes of Kannada films. One of the first few remakes was the 1974 film Zehreela Insaan, which is a remake of Naagarahaavu (1972). Some more popular examples are Shaadi No. 1 (2005), which is a remake of the 2001 film Kothigalu Saar Kothigalu, and Jis Desh Mein Ganga Rehta Hain (2000), which is partly a remake of Baangaarada Panjara (1974). Recent interest in Kannada films has grown, though, with film-makers turning to critically acclaimed films like Lucia(2013).
Remake you want to consider: Shaadi No. 1
Remake in the pipeline: Fox Star Studios has acquired the Hindi remake rights of Lucia (2013).
Bengali Cinema 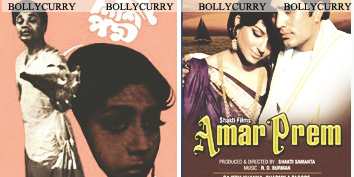 Bollywood's relationship with Bengali cinema goes back to 1953 when Bimal Roy directed Parineeta, an adaptation of Sarat Chandra Chattopadhyay's novel of the same name, which was earlier adapted into the 1942 Bengali film by Pashupati Chatterjee. In 1960, Ram Mukherjee directed Hum Hindustani, which was an adaptation of Nirmal Dey's Basu Paribar (1952). A great number of successful remakes of Bengali classics were made in the 1970s - particularly Hrishikesh Mukherjee's Bawarchi (1972), which was a remake of Galpo Holeo Shotyi (1966) and Amar Prem (1972), which was a remake of Nishi Padma (1970). Amar Prem, particularly known for the iconic dialogue, "Pushpa, I hate tears," was a huge success and went on to receive several awards. However, not all remakes are guaranteed to succeed. There is a good chance that you have never even heard of Gang of Ghosts (2014). This particular remake of the critically acclaimed Bhooter Bhabishyat (2012) disappeared without so much as a whisper. Perhaps, it is not enough to simply select a popular film, context is important too.
Remake you want to consider watching: Amar Prem
Remake in the pipeline: Begum Jaan, directed by Srijit Mukherji, is a remake of the critically acclaimed Rajkahini (2015), and is slated for a 2017 release.
Marathi Cinema 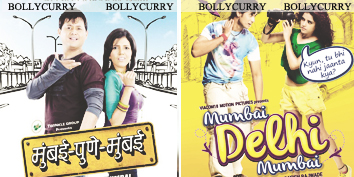 There are rumours of a Hindi remake of the film that made waves recently, and happens to be the highest-grossing Marathi film of all time - Nagraj Manjule's Sairat (2016). Bollywood's connection to Marathi films, however, originates with the classic Kunku (1937), which was also released in Hindi as Duniya Na Mane (1937). Not many people know that Raj Khosla's Mera Saaya (1966) is a remake of the film Pathlaag (1964). But some people might have heard of Mumbai Delhi Mumbai (2014), a remake of Satish Rajwade's Mumbai-Pune-Mumbai (2010) which was a critical and commercial success. The Marathi film industry has been producing some path-breaking films for quite some time now most recently Sairat, but also others like Fandry (2013) and Killa (2015). Hopefully, their Hindi remakes are in the pipeline!
Remake you want to consider watching: Mumbai Delhi Mumbai
Remake in the pipeline: If rumours are to be believed, a Hindi remake of Sairat may be seen soon.
The 1967 film Taqdeer, popular particularly for Laxmikant-Pyarelal's music, is a remake of the Konkani film Nirmonn (1966). The remake of the Punjabi super-hit Jatt & Juliet (2012) is in the pipeline. As regional films continue to grow, we hope to see filmmakers in the industry turn their attention to other regional film industries too - including the historically ignored ones. We also hope to see the focus turn to smaller, quality films instead of the hit masala ones that are often chosen for remakes. Is there a particular film that you think deserves to be remade? What's your favorite remake? Let us know in the comments section below!

Do you have a suggestion or comment for BollyCurry? Drop us a PM atBC_Dropboxtoday.

5 years ago Sorry but Dishoom doesn't look half as good as Mumbai Police did. Is it actually the remake?

5 years ago where is tamil film thupakki remade as holiday?where is ok kanmani which gona be remade as ok jaanu n vinnai taandi varuvaua as ek deewana tha