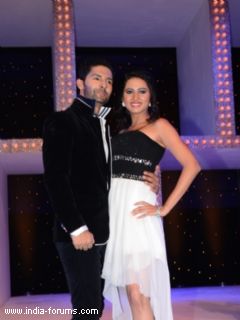 Boogie Woogie Kids Championship' host Sargun Mehta was pleasantly surprised when her husband Ravi Dubey made an appearance on the show.

The actor danced with his wife on the song 'Tum hi ho' from the film Aashiqui 2'. He was even seen mimicking several Bollywood actors, which was quite entertaining, said a statement.

The episode will be aired on Sunday on Sony Entertainment Television.

After a three-and-a-half year relationship, the couple tied the knot on December 7 in a lavish Punjabi wedding in Chandigarh.

+ 3
7 years ago Glad u r not wasting ur time totally on crap BV , i hope Shashank Vyas too do some shows on the other side like u ...

7 years ago oh wow...they both are adorable...wish them all the happiness

+ 2
10 years ago Good on her! She deserves the international recognition.

10 years ago Kudos to the babe for getting a role carved for herself in such a show :)

+ 6
10 years ago STFU!! this chick is on OLTL...wow!! i used to love that show before they changed Todd...maybe ill start watching again...