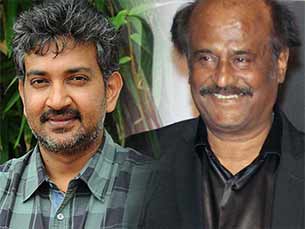 When superstar Rajinikanth sought S.S Rajamouli's permission to visit the shooting of his Telugu period-drama "Baahubali", the filmmaker felt it was one of the most memorable moments of his life.

"One of my most memorable moments: Rajini sir leaned across and said Rajamouli, I want to come to sets of 'Baahubali' and see your shooting (sic)," Rajamouli posted on his Twitter page Saturday.

Rajinikanth was in Hyderabad for the Telugu trailer launch of his film "Kochadaiyaan", which is releasing worldwide May 9.

Rajamouli said it was also the most forgettable moment of his life.

"(It was also) one of my most forgettable moment. I gaped at him tongue tied and said something resembling 'Thank you sir' (sic)," he posted.

"Kochadaiyaan" will be dubbed and released in Telugu as "Vikrama Simha".

It is touted to be India's first performance capture photo-realistic 3D animated film.

"Sushant Singh Rajput died by Strangulation and Not ...
44 minutes ago

Roadies Revolution: Double eviction and many more surprises ...
50 minutes ago