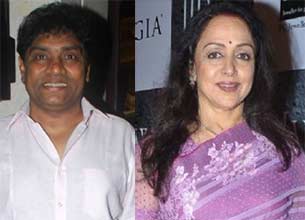 The veteran actress, who is also Bharatiya Janata Party (BJP) candidate from the Mathura Lok Sabha constituency, returned home a few days back, and thanks to her daughter Esha Deol, she had a good time watching Johny Lever's stand-up comedy show.

"Was lounging around last evening (Friday), surfing the TV when Esha called. Wanted to take me out. Shook myself out of my lethargy and got dressed to go!"

"Guess where she took me? To Johny Lever's stand-up comedy show! God! How much I laughed! Dil kholke! He was too good," Hema posted on Twitter Saturday.

The mother-daughter duo were joined by the "Dhoom" girl's husband Bharat Takhtani and her in-laws.

"Was a night full of laughter with my mom, Bharat and my in-laws! Thank you Johny ji...," Esha posted on Twitter.