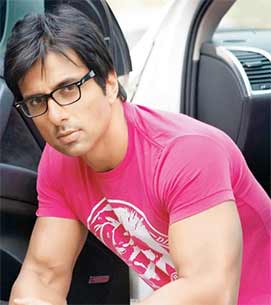 Sonu has tried his hand at negative and positive roles in his career, but King Khan is particularly in awe of his portrayal of a villain

At the unveiling of the cover of Health and Nutrition magazine featuring him Monday, Sonu was asked why he hardly features in positive roles.

He said: "I have done a lot of positive roles and I have a positive role in 'Happy New Year' also. But like I said, times have changed. You just need to entertain, whether it's a positive or a negative role."

"Recently, when we were shooting for 'Happy New Year,' Shah Rukh told me that 'I get very jealous of you when you do negative roles and I also want to do an out-and-out negative roles without any songs," added Sonu, who was seen as villain Chhedi Singh in "Dabangg".

Sonu said he is open to all kinds of roles, provided they are good.

"As long as I get to do good roles, it doesn't really matter whether it's a positive or a negative role," the 41-year-old said.