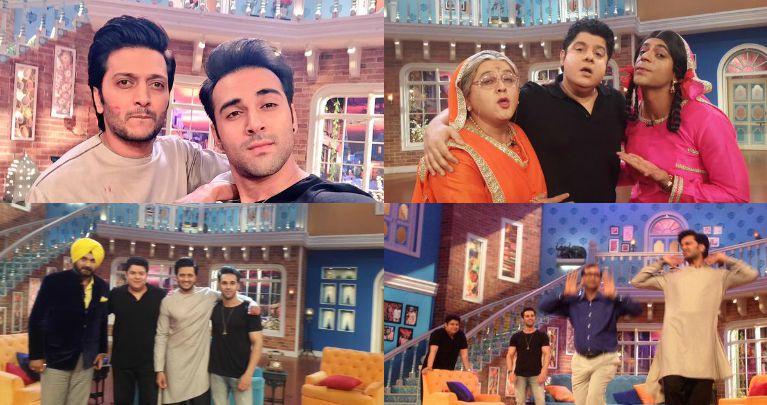 After Kapil Sharma being unwell and not able to shoot for Color's Comedy Nights with Kapil, other popular celebs are stepping in to host the show. While we have earlier reported about Sajid Khan to host some episodes for the show, we got to know that Riteish is also going to join him.

Wondering what Riteish is doing on Comedy Nights...?

Riteish Deshmukh along with his co-star Pulkit Samrat came on the show to promote their upcoming Bollywood flick, Bangistan. The duo had great fun with the new host Sajid Khan along with Kapil's family members - Dadi (Ali Asgar) and Guthi (Sunil Grover) and that can surely be seen from the above pictures.

Commenting more about the episode, actors shared on social networking site that states as follows:

Do not miss @PulkitSamrat 's impersonation of @BeingSalmanKhan no1 does it better @CNWKOfficial ,he refused bt we forced him. @SimplySajidK

Indeed an entertaining episode with B-town entertainers, coming up soon on CNWK!

+ 3
8 years ago Whoa Mr.Bachchan. Take some breath! Dont run behind limelight too much!! Your fans like you even without your blog/twitter/facebook! No need for these!

8 years ago Somehow in his last innings Mr. Bachchan seems to be overdoing the staying in touch with fans bit. Relax Big B. You had an amazing innings, in fact an enviable one! Time for you to retire gracefully without being seen to hog for the limelight.

8 years ago Yeeeaaahhh!
Make that 8 lakhs and one!