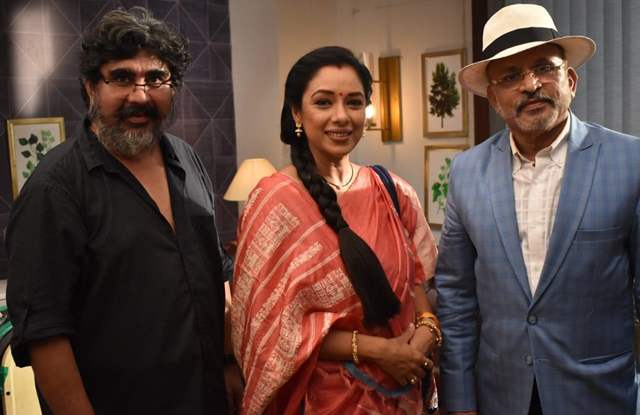 Well, this photograph will come as a shock to many as it came to us. The usually well-groomed Rajan Shahi is seen in a completely different avatar here. Wonder what he is hiding behind this transformed look?

In the pic, which seems to be taken on his new show "Anupamaa", he is posing with Rupali Ganguly and Annu Kapoor. And though he is always sporting a French beard, this is the first time he is seen with a full beard.

The producer has started shooting for his shows "Yeh Rishta Kya Kehlata Hai", "Yeh Rishtey Hain Pyaar Ke" and his much-awaited show "Anupamaa". He is even being praised by the actors of his shows for actively visiting the sets on a daily basis.

But his new look is something that has attracted our interest. A little birdie told us that this look is connected to his upcoming family drama "Anupamaa". So are we going to see him act? Is he playing a cameo in the show? Well, only time will answer all our questions. For now, we think the mystery will continue till Rajan addresses it himself.

"Anupamaa" starring Rupali Ganguly and Sudhanshu Pandey. The show was scheduled to launch in March, but it got delayed because of the nationwide lockdown. It will now air from July 13 onwards on Star Plus at 10 p.m.

CINTAA ties up with Zindagi Helpline for combating suicides, ...
32 minutes ago

Sushant Singh Rajput Revealing about the Moment he Got Very ...
32 minutes ago