After years of adapting Hollywood thrillers, director duo Abbas-Mustan is now all set to Indianise the Hollywood flick 'Italian Job'. But they are adamant on revamping the story.

'Whenever we've adapted a film, we have complet 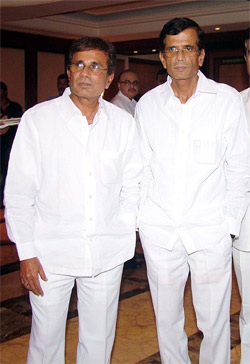 Featured Video
ely Indianised the story. Though Studio 18 has bought the rights and we can use every frame from the original, we don't want to do that. We're going to Indianise 'Italian Job',' Abbas told IANS.

'We'll add roles for two heroines. We might even have an American actress in the film. And the villain will be played by one of the top heroes. We want to make it better than the original,' he added.

The director duo says that Studio 18 offered the project to it after seeing the latest thriller 'Race'.

'Studio 18 thought of us for 'Italian Job' after seeing how we shot the chase sequences in 'Race'. Two years ago, to execute the intricate action scenes in 'Italian Job' would've been tough.

'Today, we can comfortably pull it off. Our producers are willing to go all out. No expenses will be spared to make sure our 'Italian Job' is as good as the original,' said Abbas.

Abbas-Mustan are besieged by Bollywood stars who want a part in it.

'It seems every major hero in Mumbai has always wanted to do the 'Italian Job'. It has got everything - from a heist to comedy,' laughed Abbas.

'Italian Job' was originally made in 1969 with Michael Caine in the lead. It was then remade in 2003 starring Mark Wahlberg and Charlize Theron. Both the original and the remake were big hits.

'It's a film that will appeal to people from the age of 18 to 60. It's completely different from the kind of comedies Rumi directs.'