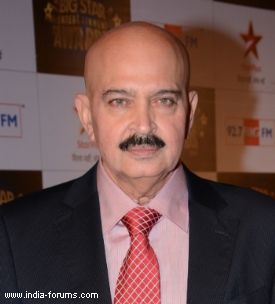 Director and producer Rakesh Roshan rubbishes reports that "Krrish 3" box office collection has been fudged and says that the criticism shows the kind of jealousy and negativity that this industry thrives on.

He says that the film has grossed Rs.244 crore and is likely to touch Rs.250 crore.

"Isn't this the way it has always been in the entertainment industry? We suffer from the 'crab' and 'grab' mentality. We can't watch anyone succeed," said Roshan who teamed up with his son and Bollywood heartthrob Hrithik for the movie.

"We should all be celebrating the success of a film, no matter who produces it. Because every individual film that succeeds benefits the entire industry," he added.

Q: It is being said that the quoted box office collections of "Krrish 3" are being inflated?

A: Why should I fudge figures at this stage of my career? Do I need to? Who is saying all this?

Q: Some of your colleagues from the industry, to begin with.

A: It just shows the kind of jealousy and negativity that this industry thrives on. We should all be celebrating the success of a film, no matter who produces it. Because every individual film that succeeds benefits the entire industry.

Q: So what's the truth about the box office figures of "Krrish 3"?

Q: Why are members of your fraternity so eager to prove your figures wrong?

A: Isn't this the way it has always been in the entertainment industry? We suffer from the 'crab' and 'grab' mentality. We can't watch anyone succeed. And if someone does well we want to grab that success for ourselves. The minute I took the unpopular decision of releasing my film in partnership with single-screen distributors I knew I was looking for trouble.

A: I haven't become corporatised yet. I am the only major producer, who still makes films and releases them without tying up with corporate houses. That makes me an easy target for everyone in the film industry. Or so they think.

Q: Are you saying you are arm-twisted because you are not tied up with any corporate houses?

A: Yes, there is a lot of pressure from corporate houses, film federations and union bodies. But we are very sure of our box office collections. It's the so-called trade experts who are giving conflicting figures. They should all come together and give one figure that is correct, according to them. And they should stop talking nonsense about how Hrithik and I are at loggerheads over the figures.

Q: Among the blockbusters of 2013, "Krrish 3" collections was the most debated?

A: Like I said the trade experts chose not to consider my Tamil and Telugu collections, though the collections in those two languages were happily considered in the case of "Dhoom 3".

Q: So what is the exact collection of "Krrish 3"?

A: Up till now the movie has collected Rs.244 crore. And it's still showing in theatres. But I don't think it will touch Rs.250 crore.

Ashalata Wabgaokar passes away due to COVID-19
21 minutes ago

Zarina Wahab was Tested Positive for COVID-19; Actress ...
31 minutes ago