Making a foray into the arena of films with "Apna Aasman", ad-film-maker Kaushik Roy has brought to fore an issue that rarely strikes our mind. We generally try to evade our responsibility towards differently-abled persons simply by creating a class for them in the society and allowing some reservations in public amenities. Kaushik tells us about how he has portrayed challenged people as extraordinarily talented in his film.

Q: Is "Apna Aasman" based on a real-life story?
A: I can't say it's based on a true story, but it's inspired by real-life incidents and characters. We regularly find characters like Buddhi in our society but we ignore them.

Q: Don't you think that through the character of Satya (played by Anupam Kher) you are fantasizing the whole story?
A: Yeah, it's true. But if you keep your eyes open you'll find sants and babas in society who are out to cheat people. They are somehow like Dr. Satya. The only intension I had in bringing this character into the film was to tell people to steer clear of people like him.

Q: Did you arrange any workshop with the actors before this film? 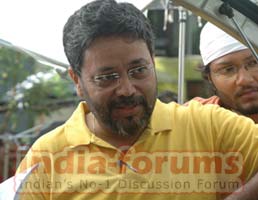 A: We had neither the budget, nor the time to go for any kind of workshop. But the actors were good enough to go without any training. We had to have a workshop with the actor playing Buddhi as he is the core of the film and since the character was quite challenging, too. But this boy left for Dehradun for three days for a basketball match and couldn't complete the workshop. We had started looking for another actor who would fit into the role of Buddhi when he returned and requested that he wanted to work. Since he's the son of my friend, I couldn't refuse. We had already wasted a lot of days by then, so we started shooting right away. When I watched him acting, I thought to myself that it was good that I hadn't wasted time on the workshop.

Q: What research did you do for the film?
A: I used to watch disabled people. Sometimes to keep them under control, people around them hurt their feelings without thinking of the aftermath. In one scene, Dr. Sen says: "Buddhi isn't disabled, but intelligent in an exceptional way. He has no talent to be a doctor or an engineer, but we don't have the talent he has."

Q: Would you call the relation of the doctor and his patient in the film a complete one?
A: As far as the relationships in this film are concerned, they are all based on human emotions which do not require words to express. There are things that I have tried to reveal in the film without using words.

Q: Did you ever have to change the story?
A: All the actors were so good in their work that I didn't have to go for any kind of change in the story. Well, I had to attempt minor changes during the shooting which proved beneficial. Truly speaking, it only made my job easier.

Q: Is the tagline - "How far can you go to make your child talented?" – applicable to normal children, too?
A: Absolutely. That tagline goes for everyone. Previously, career options were limited, but times have changed now. I can remember that when I had told my professor about me joining an ad agency, he thought I was going to paint film posters outside cinema theaters. That's because the advertisement industry was restricted at that time. But now the scenario is quite different in any field.