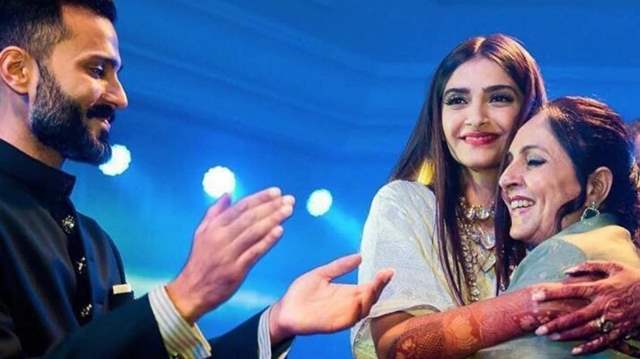 Sonam Kapoor Ahuja and Anand Ahuja completed two years of their happily married life today and both their mother's made sure to make their wedding anniversary a special one!

As we all know, the whole world is battling Coronavirus and to prevent the situation from getting worse, India is under lockdown. In such tough times, many family members are away from each other and so is the case with the Kapoors and the Ahujas! However, just like every other mom, even Sonam and Anand's mom did what mothers are best at; making the most use of the available resources!

To make their children's one of the most important days of their lives enjoyable and memorable amid times of social distancing, they celebrated it virtually.

On May 8, 2018, Sonam and Anand exchanged vows in a lavish Punjabi wedding held in Mumbai and today marks two years of their blissful marriage.

Currently quarantined at their Delhi residence, Sonam Kapoor’s mother Sunita Kapoor and mother-in-law Priya Ahuja took to their social media accounts and penned down heartfelt notes for their bacchaas and also shared some unseen pictures from their wedding ceremony to wish them many years of togetherness.

Sonam's Saasu Maa (mother-in-law) went on and posted a series of pictures and messages across her social media handle. However, it was her beautiful and heart-warming note for Sonam that won our hearts!

Sharing her pictures with Sonam, Priya Ahuja wrote alongside, "We always wished to have a daughter and then you came and filled our lives with so much happiness and joy. You are our sweetest daughter and we love you dearly. Have a great anniversary and a lifetime of happiness ❤️❤️"

In her next post, she posted pictures of Sonam and Anand from their Anand Karaj ceremony and from when they were leaving for their honeymoon, and wrote alongside, "Dearest Sonam and Anand, Happy Anniversary Bacchaas! May God bless the two of you abundantly in love, joy, and happiness. May your love for each other continue to grow with each passing year. Our love and blessings are always with you.????????"

On the other hand, Sonam’s mother, Sunita Kapoor too wished all the love and luck to the couple along with pictures of them from an event as well as their mehendi ceremony.

Her post read, “Happy happy anniversary to my darling Sonam and Anand ..May you always be blessed and surrounded by all the love and happiness We love you so much and miss you so much.”

Both Sonam and Anand thanked Sunita for her wishes. While Anand expressed of being blessed to have role model like Sunita in their lives, Sonam expressed of missing her mother.

Breaking
Breaking Namish Taneja back on ‘Aye Mere Humsafar’ sets after ...
18 minutes ago

No Escape Plan for Rakul; To Appear for Questioning before ...
25 minutes ago

Deepika Padukone to Reach Mumbai From Goa in Charter Plan; ...
40 minutes ago