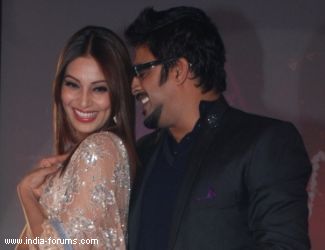 Box office continues its stint with romantic comedy with "Jodi Breakers" and "Tere Naal Love Ho Gaya" hitting the screens Friday. While the former will see an unconventional pair of Bipasha Basu and R. Madhavan together, the latter has real life couple Riteish Deshmukh and Genelia D'Souza.

The film's story takes a dig at dysfunctional romantic relationship that eventually leads to break ups. Sid (Madhavan) is a break up specialist, who helps incompatible people get out of wrong relationships. He meets Sonali and both of them take the business to new levels.

Their journey together takes them through hilarious and outrageous experiences. But an unexpected twist in a case turns their world upside down and they end up falling in love.

The film has been shot in exotic locales of Greece, Goa and Mumbai. And Bipasha admits she had to chase the script of the film.

"Two years later I woke up one afternoon and I called my manager to ask where is that script? So, we traced the script. This is the first time that I ever got to chase a script," she added.

Bipasha had also recommended Madhavan for the film. Legal hassles before the release of any film seems to have become a trend, and "Jodi Breakers" is not an exception.

The film was embroiled in a plagiarism controversy when the distributors of Hollywood film "Heartbreakers" revealed their doubts about the originality of the content in "Jodi Breakers".

But "Jodi Breakers" makers denied it and offered to let the "Heartbreakers" team read the entire script, provided they agree to sign a Non Disclosure Agreement (NDA). However, the issues were later sorted out.

The film was previously titled "Shaadi Fast Forward", but the name was later changed to "Jodi Breakers". The soundtrack of the film is composed by Salim-Sulaiman and is already making waves. There is also a special song dedicated only to Bipasha in the film.

"Jodi Breakers" is a crucial film for Madhavan as well as Bipasha. Expectations are riding high after Madhavan's last release "Tanu Weds Manu" raked in moolah at the box office, while Bipasha's "Players" failed to impress the audience.

After a lavish wedding, real life couple Riteish and Genelia who got married this month, are returning to the big screen with Ramesh Taurani's "Tere Naal Love Ho Gaya", a story of an unlikely couple falling in love.

Free-spirited tomboy Mini (Genelia) is the most sought after girl in her native place, not because she is gorgeous, but she has a Canadian passport and is heir to her father Bhatti's (Tinu Anand) business empire. Bhatti is eager to marry his daughter off as soon as possible.

However, her life takes a turn when she meets mild-mannered Viren (Riteish), one of Bhatti's lowly employees. In a bid to escape her impending marriage, she decides to flee with Viren, making it look like a kidnapping.

Riteish and Genelia are returning as lead on-screen couple after seven years. Their last film together was "Masti" and people are eagerly looking forward to the release of the film.