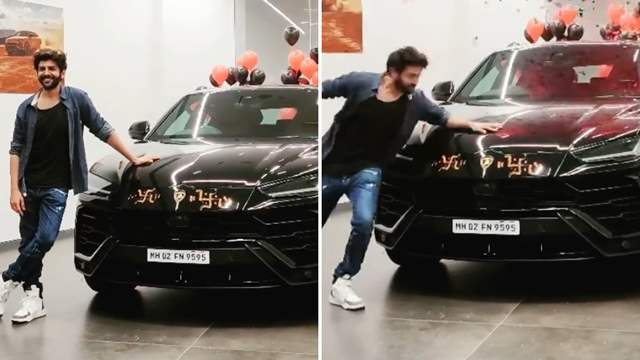 Bollywood’s heartthrob and the actor on every director’s list, Kartik Aaryan is reaching new heights and how.

Kartik, who had tested positive for Coronavirus recovered after 14 days of home quarantine and made his first appearance in the city post his diagnosis. The actor celebrated his COVID negative report with utmost fanfare as he purchased a swanky new car

Kartik Aaryan bought a new Lamborghini car worth Rs 4.5 Crore, and as he becomes the owner of this beast, his reaction to it was hilariously unmissable. He shared a video on his social media handle where we can see the actor posing next to his new purchase, however, as soon as some confetti was blown from behind, Kartik was caught by surprise and had a tiny slip!

Kartik made his debut in 2011 with Luv Ranjan’s romcom, Pyaar Ka Punchnama, wherein his famous monologue went viral and made him a star overnight. Later, he went on to star in films like Kaanchi, Akaash Vani, which did not do well on the box office.

However, Pyaar Ka Punchnama 2 proved to be a turning point for the actor, post which he finally gave Rs. 100 crores grosser with Sonu Ke Titu Ki Sweety in 2018. He delivered two blockbuster hits in 2019: Luka Chuppi and Pati Patni Aur Woh and was last seen in Imtiaz Ali’s Love Aaj Kal.

Kartik has some big banner films including Dostana 2, Bhool Bhulaiyya 2, Dhamaka in his pipeline.

No theater release for Kartik Aaryan's Dhamaka; Actor reveals how he ...

13 days ago Congratulations and have good health