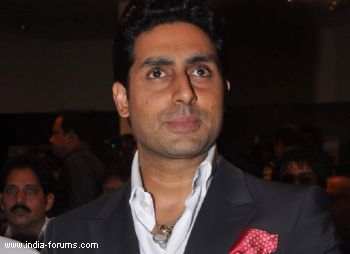 After being part of entertaining films, Abhishek Bachchan is keen now to make a movie on climate change but says it is important to have the right story that can strike a chord with the audiences.

"I want to make a film about saving the environment and bring about a change. I don't know if anyone of you is willing to fund a movie like this, but I plan to act in it," Abhishek, who is busy shooting for Rohit Shetty's "Bol Bachchan", told IANS.

But the challenge lies in finding an engaging story that can convey the message in an interesting manner and help in bringing footfalls to the theatres.

"The challenge is to get a story that is compelling enough for Indian audiences to see. I know there are one or two films like 'Day After Tomorrow' that have been successful in the West and people came out thinking what if this actually happens tomorrow," said Abhishek.

"If I make a film just talking about climate change, it would be boring to watch. The real challenge is to make a film that would be engrossing enough for the audiences to come out and watch and deal with the issues. If we come across something like that, I am on and I'll sign on the dotted line any day," he added.

A bevy of Bollywood stars have associated themselves with various social causes and Abhishek is one of them. He has been honoured with the Green Globe award for his efforts towards creating a greener environment.

The actor, who featured in films like "Yuva" and "Guru", feels celebrities can bring about a change by lending their voice for causes.

"I am not talking about myself, but a lot of my colleagues the world over have lent their voice for saving the environment or other social issues. I think if a celebrity has the ability to make a difference and influence even two people, then he should help...," the 35-year-old told IANS.

"There is some kind of purpose to so-called celebrityhood; hopefully some people would listen and follow suit...I think if a celebrity has a voice, one should go out there and make it work. Thankfully, if one of us shows up, we have the media writing about it, and media is the actual agent to bring about a change the world over," he added.

Youth can play an important role in bringing about a change, feels Abhishek, as youngsters know what they want.

"I really feel that youth will make the change. Youth are not willing to be told what they have to do because they are very sure what they need to do. So more to the youth of the nation as they would play an important role in bringing a change," he said.

He has been doing his bit towards creating a cleaner, greener and energy-efficient future by creating awareness through various endeavours on issues affecting the earth.

Deepika Padukone likely to be Summoned by NCB for ...
44 minutes ago