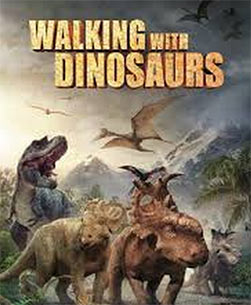 From the hearth of BBC Earth Films, "Walking The Dinosaurs" is an edutainment film

that educates the audience about animals, particularly the dinosaurs that wandered

on the surface of the planet, about 70 million years ago, during the Creataceous

This is not a documentary film. In fact, it is a charming love story bordered around

the hero's journey of existence. It exposes the dinosaurs' survival instincts

in a truthful and convincing manner.

The film starts off with a present-day scene, where Paleontologist Zack (Karl

tooth that he has in his custody.

On the outskirts of the forested land, Ricky encounters Alex (John Leguizamo), a

talking crow who tells him: "Every fossil tells a story. It opens a window to the

ancient past. With this, Alex morphs into an Alexornis, or a sort of

Here, Alex introduces the audience to Patchi, (Justin Long) a baby Pachyrhinosaurus and his tribe. The Pachyrhinosaurus is a strange choice for heroism. This dinosaur which looks like a rhinoceros has a thick skin, a bulbous nose and several horns, one of them growing from a tuft of flesh that blooms on its head like a thick leaf.

Patchi, who is the weakest among the litter, lacks in size but makes up for his courage. During one of his early adventurous exposures, he acquires a hole in his crown thus making him unique. He often stumbles along behind the herd, occasionally being tormented by his older alpha sibling Scowler (Skyler Stone).

Apart from the Pachyrhinosaurus, there are a plethora of dinosaurs and other wildlife

creatures that keeps you glued to the screen. The most prominent and magnificent of the lot were the lizard hipped dinosaurs; the two and a half ton fierce looking Gorgosaurus and the duck-billed Edmontonsaurus.

descriptions of their names and their meanings.

The film shows the rugged and harsh realities of nature's survival dispositions. To

that it is targeting kids. But, unfortunately the narration is verbose and continuous,

Dialogues like, "When life gives you lemons, make lemonade" or "They are going to have a dinner party and you are going to be the main course" bring in the wry British

The images provided by Director of Photography, John Brooks are life-like and real.

The animated, computer generated images seem so authentic that it makes you

believe you are in that era. The wide-angled images capturing the migrating

The 3D effects are very effective, especially in the scene where Patchi shrugs off

the crab or when the omnivorous squirrel jumps to catch its prey. These scenes

are out of the ordinary.

The background score too is engaging. The vocals are lively and especially the last

number "Live like a warrior" invigorates a sense of heroism.

Directors Neil Nightingale and Barry Cook's "Walking with Dinosaurs" is indeed a gorgeous visual feast that would delight kids.

On Return to TV, Ellen Addresses 'Toxic Workplace ...
14 minutes ago

Kaveri Priyam on Being Disappointed With 'Yeh Rishtey Hai ...
24 minutes ago