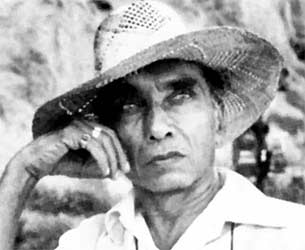 The passing away of cinematographer V.K. Murthy signals almost the end of the golden phase of cinema represented by actor-filmmaker Guru Dutt. Cinematographers like Santosh Sivan, Anil Mehta and Ajay Bahl say Murthy inspired many people.

Murthy, Dada Saheb Phalke award recipient, died at the age of 90 in Bangalore.

Murthy was not a mere cinematographer. His black-and-white images in Guru Dutt's monumental masterpieces created a play of light and shade which cinematographers to this day are trying to analyse. It was Murthy who made actress Waheeda Rehman look so beautiful in "Chaudvin Ka Chand" that Shakeel Badayuni's lyrics comparing her beauty to the moon seemed perfectly justified.

Born in Mysore in 1923, Murthy began his illustrious career as cinematographer with "Baazi" in 1951. Murthy and Guru Dutt went on to collaborate in several masterpieces: "Jaal", "Aar Paar", "Mr. & Mrs. 55" and "CID", among others.

But it was Guru Dutt's "Pyaasa" and "Sahib Bibi Aur Ghulam" followed by "Kagaz Ke Phool" whose visual images linger to this day.

"Kagaz Ke Phool" was the first Indian film to be shot in the Cinemascope format.

Murthy's play with light in one particular song sequence "Waqt ne kiya kya haseen sitam" inside a near-empty film studio is to this day considered a textbook of lucid cinematography.

Till Guru Dutt was alive Murthy worked with no other filmmaker. After Guru Dutt's death (1964), Murthy did some extraordinary work in Kamal Amrohi's "Pakeezah". He also shot Govind Nihalani's historic television series "Tamas".

"Murthyji was one of the many formidable cameramen who contributed his skills in capturing 'Pakeezah'. There were other camerapersons on board - R.D. Mathur, Fali Mistry, Jal Mistry, Nariman Irani, Keki Mistry, B K Lad and others," said Amrohi's son Tajdar.

Sivan, who is also a filmmaker, felt sad on hearing of Murthy's death.

"His cinematography was always a source of inspiration for all students of cinema. His work inspired many generations. His visuals have a timeless quality," he said.

"The simplicity of the man and the greatness of his art were a source of personal inspiration for me. For a man who started as a violin player for background scores, his achievement in cinematography is a testimony to the fact that all art is basically intuitive. We've lost a true artiste," added Mehta.

"The strong and magnificent imagery he created is yet to find an equal after almost half a century of evolution of the cinematic technology and image-enhancing tools. He continues to inspire and humble in equal measure," said Bahl.