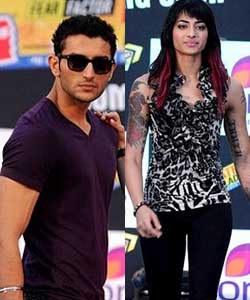 VJ Bani, one of the contestants of this season's Khatron Ke Khiladi Torchaar on Colors, we hear found her partner during her trip to Cape town for the show. Our khabroo gives us an update that Bani was indeed going strong with Shashwat Seth who was the partner of Aliesia Raut.

A little birdie told us, "Both were having a good time on the show. They met during the filming of the show and got along very well".

We also hear that Bani got into major fights with more than one person during her tenure in the show. Her fight with Aashka Goradia and Khalid Chowdhury, Sambhavna Seth's partner who were eliminated in the first round were prime examples. Bani in fact went on to call Khalid a loser and this turned into a big fight".

We tried getting in touch with Bani but she was unavailable for comment.

9 years ago I thought she was dating Anthony from Roadies 4. She was good contestant in Roadies 4. I like her personality.

9 years ago lmao guys!! It's "Stunt Partner" Not "real-life partner" Bani is genuine. I like her.

9 years ago VJ Bani looks like a dude dressed in a drag!!
As far as snatching is concerned, nobody can snatch anyone unless that person wants to be snatched and that only happens when there is a problem in their relationship in the 1st place!

+ 4
9 years ago i never expected to her that she will snatch partner of another , really she seems very greedy ..

+ 2
9 years ago THose who watched Roadies 4 know that Bani is very bad mouthed and hot tempered as well.

+ 6
9 years ago whatever!
she is not a celebrity i think ...at least i didnt see her before KKK4
who cares she is dating whom!!

+ 2
9 years ago sworry to say i donno this girl Bani but feel she is very masculine..not interested to know about all this..who cares?

+ 4
9 years ago i m confused by one line , she dating with partner of another contestant???