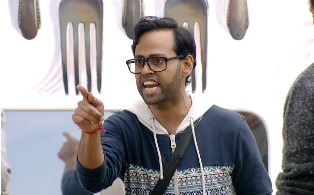 The courtroom session with Rajat Sharma did certainly unmark some of the personality traits of the Bigg Boss housemates that went unnoticed till now. One such contestant is Sangram, who has always maintained a diplomatic stand since the beginning of the show.

When Rajat questioned Sangram Singh about not protecting Andy when he was being attacked by Kushal Tandon, Sangram Singh did not have an answer as he had escaped from the situation.

It came as a shock for VJ Andy when Rajat Sharma showed a clip of Andy and Kushal's fight where Sangram Singh could clearly be seen standing in a corner. Since that time, we will see Andy maintaining a distance from Sangram and has not been talking to him.

In the morning, while Ajaz Khan and Sangram are having a conversation, Andy overhears Sangram complaining about him and joins in the conversation. Andy, who is already upset with Sangram, gets even more agitated which leads to an intense argument between them. Andy is seen yelling on top of his voice while asking Sangram for a justification for not being by his side when he was being targeted by Kushal Tandon.

The situation goes out of hand when Sangram in a harsh tone tells VJ Andy that he is playing the game for himself and doesn't want to lose it because of someone else. Sangram's discourteous behavior compels Andy to break all ties with his dear friend Sangram.

Is this the end of the remarkable friendship of Sangram and Andy?

7 years ago Sangram has been the most political so far

7 years ago Finally sangram' s tru color will be revealed...at least he accepted he is playing a game! : X

Tiashah 7 years ago Too right Sangram is in the show to win! and whats this with him not taking a stand, he avoid arguments and no he wasnt standing on a side he was not getting involved why should he? the people in the bigg boss are going crazy! if you dont argue and fight you are not taking a stand! Andy needs to get over the so called attack..Sangram is in to win..good on u sangram do what you are doing and you will win!