When we watched Maneesh Sharma's Fan (2016) in theatres last month, we heard someone in the hall whisper (to a friend, probably) that they didn't think that the actor playing the role of the fan was Shah Rukh Khan at all! Surely they had roped in a look-alike to play the part? While we were amused, it did make sense. After all, the "fan" in the film looked like someone in his twenties, without the wrinkles that come with age and although played very much by Shah Rukh Khan, Gaurav Chandna looked convincingly different. 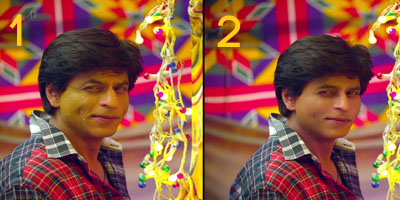 (2: Khan's look in the film after digital enhancing,
Source: Yash Raj Films, https://youtu.be/G5JMoRx_QyM)
This was made possible largely through the fantastic work of the make-up artists, and truly top-notch work by the people at Red Chillies VFX, who were responsible for the visual effects (VFX) technology that went behind Khan's makeover. Today, outstanding and almost impossible things are made possible in our movies, thanks to the advent of VFX and the increasing use of such technology to create spectacular effects on screen. Think, for example, that particular scene in the film Kick (2014) where a train is speeding towards Salman Khan and he manages to cross the railway track without missing a single beat. Or for instance, of Shah Rukh Khan jumping out of a moving train in Chennai Express (2013). They were all created with the help of a green screen and the exemplary artists responsible for the visual effects employed in these films.
One of the first major computer graphics studios that came up in India and has been behind some stunning digital heights in our cinema was Prasad EFX, a division of the Prasad Group. The team was involved in the creation of one of the first lead characters in Bollywood having mythological roots and made entirely using CGI (Computer Generated Imagery), the creature in Creature 3D (2014). The movie did poorly, but it certainly was a milestone. Prasad EFX has also been involved in some stunning work in other big-budget Bollywood films like Krrish (2006) and Rang De Basanti (2006). 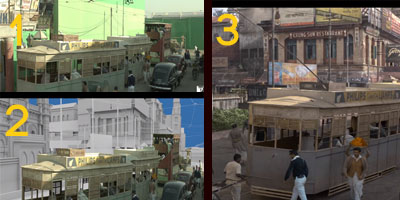 (Source: Yash Raj Films, https://youtu.be/JX01hwOool0)
One of the first films to make heavy use of VFX shots was Love Story 2050 (2008), and it was also one of the first big-budget Indian sci-fi films. Today, however, many Bollywood films employ VFX techniques even when they are not heavily dependent on technology. For example, extensive use of VFX was made to graphically recreate 1940s Kolkata (pictured above) in Detective Byomkesh Bakshy! (2015). The team at Prana Studios was behind this. A team of artists at Tata Elxsi's Visual Computing Labs graphically created the stadium crowd and atmosphere in Bhaag Milkha Bhaag (2013). The team at Red Chillies VFX was responsible for recreating the 1970s in Farah Khan's Om Shanti Om (2007). 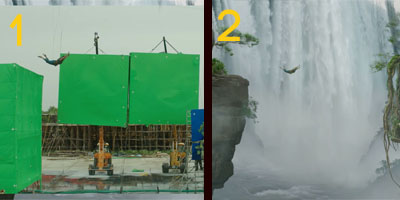 (Source: Makuta VFX, https://youtu.be/GF8yAwf0f4k)
Last year's magnum opus Baahubali: The Beginning, that was also dubbed and released in Hindi, opened to rave reviews and garnered international attention and acclaim for its stunning visual effects (above). The Visual Effects Supervisor of the film, V. Srinivas Mohan, won a National Award for Best Special Effects this year. The Hyderabad-based Makuta VFX was responsible for 50% of the CGI work in the film, and among other things was responsible for the creation of the gigantic waterfall, enormous mountains and spectacular temples and courtyards. Some 600 artists, including those at other studios like Firefly Creative Studio and Prasad EFX, were behind the approximately 4500 VFX shots that were used to create the visual spectacle that is Baahubali. 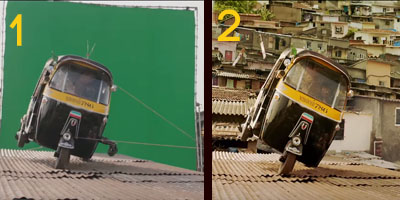 (Source: Yash Raj Films, https://youtu.be/EFiSRYhu924)
Ra.One (2011) was a major milestone in the history of science fiction films in Bollywood. The film made use of nearly 2500 VFX shots, and was a visual treat. The VFX team behind the larger-than-life Dhoom 3 (2013) made it possible for Khan to play a double role on-screen. A lot of special effects, including that of motorbikes flying in mid-air and auto-rickshaws zooming over rooftops (see above), were created by Tata Elxsi's Visual Computing Labs with the help of the green screen.
About 70 percent of Bollywood movies today utilize visual effects and an average of 1000 shots are used to enhance scenes. It is safe to say that VFX technology is pretty much integral to films today with the large number of studios that have cropped up in recent years contributing to this phenomenon. One such studio is Yash Raj Films' brand new visual effects and post-production division called yFX, the team that is behind the soon-to-be-released Sultan. A bunch of extremely talented artists such as V. Srinivas Mohan have been hugely involved in this digital revolution. The future looks bright, quite literally, for Bollywood films!
Writer: Tanisha N.
Editors: Ritchelle C. and Gunia K.
Graphics: Harjot K.
Have a suggestion or comment for BollyCurry? Drop us a Private Message at BC_Dropbox Today!
0 Likes

dare.devil 4 years ago Nicely researched and well written article for once in I-F!! Good job writers