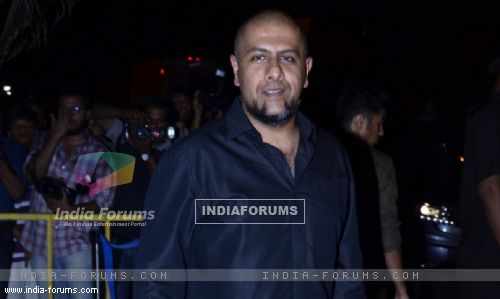 Colors Comedy Night with Kapil is one such show is that has taken the genre of comedy and spontaneity to another level altogether. The show had recently been to Dubai where the entire star cast had performed live in front of 4000 audience.

Well, be it television actors or Bollywood celebrities or singers, all of them have come on the sets to promote their respective show or movie owing to which audience for the very first time have got an opportunity to interact with their favorite artists on a personal level.
This time we have Vishal Dadlani the famous music composer visiting the sets of Comedy Nights with Kapil. The man has given some super hit songs like Tune Mari Entriyaan, Desi Girl, I Hate Love Stories et al. Farah Khan's Happy New Year and Siddharth Anand's Bang Bang is the latest successful and block buster super hits that he has recently composed.
Vishal went on to tweet about his happiness and shared with the world. "In Film-city to shoot for "Comedy Night With Kapil". There's actually cellphone network here! Miraculous!! When did this happen?"
If actors and singers come on the sets to promote their shows and movies, then why not music composers for their songs?
Well, we hope the show does all well in the future as well and reach greater heights.
Keep reading this space for more updates on your favorite shows.
Upasana Patel
0 Likes

shravan95 9 years ago eww this is gross...seriously, i dont like this trend &gt;.&lt; i am size zero naturally but i dont starve myself. in fact, i am such a foodie. people should be happy with what they have and not try to be someone they are not...

--AROMAL-- 9 years ago I have no problem if someone is size 0 naturally,but anushka is not.When public figures do this,they influence the people all those who follow them.When kareena did it,there were news reports of girls starving themselves to be like her,and she faced ridicule for it too.Hence now shes thankfully gained some weight.And now,anushka,whom i liked,is also doing it.Dont these people realize how they affect others,especially teenage girls,they should have some responsibility being public figures.Anyway,if any of u say its none of our business,its her body,blah,i agree to it but m just dreading going to college and seeing the canteen only filled with boys again ;p
Gain weight anushka,curves are always in :)

Tereliye06 9 years ago This picture looks photo-shopped ...there is no way she lost so much weight in a month or two cause when she came on India's most desirable she looked same as she always did ...this is rubbish!

Prinsesse.Suvi 9 years ago Her face looks to big for her body...please gain some weight!

shaina1 9 years ago i'm a size zero right now but that doesn't mean i'm anorexic. my body just works that way even though i never exercise and i am addicted to junk food. Like a few years ago, even size zero jeans and dresses were loose on me. being size zero doesn't mean starving yourself. it's actually a natural thing but i don't think anushka's supposable size zero is natural. just be proud of who you are rather than being concerned over body size. anyways she looks like more of a size two in that picture.

Nikhi. 9 years ago No. Gosh. Why?! If that picture's anything to go by, the size-zero thing is not doing her any favours.

I hope this is all a rumour. Or perhaps she's having to do it for a future role where she plays an anorexic girl or something? I don't know...I just didn't expect her to go the size-zero way.

SugaAgustD 9 years ago I think these actresses r always tensed about their figure!so they do such things to be more confident!!!

Anushka already have a stick thin figure! And Sameera Reddy once askd her how to maintain a figure lyk her and anushka burst out suddenly saying that nowadays actresses think too much about weight other than acting!!!and sameera was stunned at her reaction!!!
So why is doing the same stuff after giving a lecture?? I didn't expect this from her! And I think people will be surprised at her bcoz she was already too much skinny!!

SankiPagal 9 years ago she luks skinny wid her broad double chinned face... bt she luks pretty in a way.. :/

bulbul123 9 years ago I LOOOVEEE anushka but this is so silly. I am sorry i so think tht bollywood actors are trying to be like americans and it so stupid. In america like size 0 is everywhere and thts y wen i was in year 8 we got a lesson on hw unhealthy it is i mean tht was years ago and its in my brain i nw tht u shouldnt be a size 0. I am sorry bollywood will never be like the americans cause at the end of the day they r all indians so stick to wat u r. Having explict scenes like american movies have size 0 like the hollywood actors it stupid just stick to wat u r. Do they think tht they are attracting men like this cause if they r those MEN have to sort themselfs out Or it could just be to stay in the news whatever it is u aint damaging any1 else but urself. In BBB she loooks really nice and in badmash company and even in patila house so y change. It sooo silly i love her to bits but she needs to sort herself out