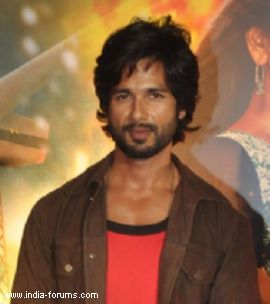 Actor Shahid Kapoor, who is teaming up with "Kaminey" director Vishal Bharadwaj yet again, says the new movie, "Haider", has given him a chance to explore a new space.

Talking about "Haider", Shahid said: "It's awesome. I love working with Vishal sir as he has given me the best character of my life."

"Vishal sir is doing the third adaptation of 'Hamlet'. Earlier he has done 'Omkara' and 'Maqbool', so it's ('Haider') is very different from 'R... Rajkumar', and it has taken me to a different space. I am enjoying that," he added.

Shahid refrained from revealing much about his role in "Haider". But said: "All I can say is that I am having great time working in this film. We started shooting some time back and we have shot for around 10 days."