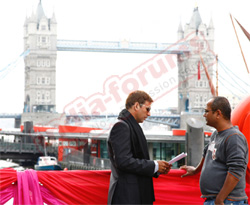 Mumbai, Oct 20 (IANS) Director Vipul Shah of 'Namastey London' fame has invited Anees Bazmi to make 'Singh Is King' for him as he feels it's not practical to run his production house with just his directorial ventures.

He said he would now ask more directors to make films for his banner.

'It was no longer feasible to keep my production house running with my own directorial inputs. So I invited Anees Bazmi to direct 'Singh Is King' for me. Now I'm ready to invite other directors to make films for my production house,' Shah told IANS.

The film starring Akshay Kumar and Katrina Kaif will be shot in Australia and Shah has accompanied Bazmi there to help him out.

'We're working with an entirely Australian crew. Though I've worked with a foreign crew while shooting 'Namastey London', Anees hasn't really had any experience in a foreign shoot. So I am here to guide him.'

Isn't there bound to be a clash when two directors work together as producer and director.

'Not at all,' protested Shah. 'I leave the execution entirely to Anees. I'm here only to help him in whatever capacity (possible).'

The director says 'Singh Is King' would have the kind of budget that he has so far not been able to afford for his own directorial ventures.

'Thanks to my collaboration with Adlabs, I feel we can give this film a truly international feel.'

The cast, which also includes Neha Dhupia, Om Puri, Javed Jaffry and Sonu Sood, has been in Australia since Sep 18. Shooting begins Nov 2.

'We've to be very careful with our shooting. The safety rules in Australia are very strict. We can't afford to goof up,' Shah said.