You are here :
OVERVIEW ABOUT
2
FILMOGRAPHY
2
NEWS
1
VIDEOS DISCUSSION FANCLUB 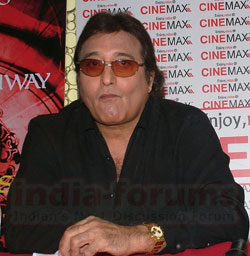 Featured Video
Actor Vinod Khanna will now don the avatar of a mentor in producer Anjum Rizvi's latest musical 'Fast Forward'. And here he will be seen mentoring youngsters who are competing to showcase their dancing skills. Reportedly Khanna has lost oodles of weight to play the role.

Producer Anjum Rizvi who has produced films 'Ahista Ahista' and 'Charas' and also completed a songless thriller 'Wednesday' with Naseeruddin Shah and Deepal Shaw has cast new actors like Rehan Khan , UK-based Sabina Sheema, Akshay Kapur, Bhavna Pani and Siddhant Karnik to get mentored by Khanna in the film. Since it is an out and out dance film , the young cast has been religiously rehearsing for the past three months. The film will have Sonia Jaffer, Mahesh Manjrekar's partner in the last season of 'Jhalak Dikhlaa Jaa' choreographing all the dances in it. The music of the film directed by Zaigham Ali Sayed has been scored by DJ Akbar Sami. Rizvi hopes to release the movie early next year.