View Profile
It wasn't long ago, when diagnosed with low haemoglobin levels, during Dusshera, Vidya Balan had to be admitted to Lilavati Hospital. 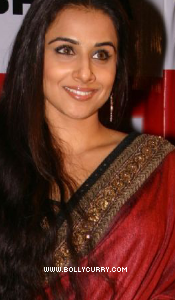 Complete rest was the medication prescribed, which Vidya had refused due to her barely-able-to-breathe hectic schedule, panning around her upcoming, The Dirty Picture.

With promotional campaigns of the same around the corner, makers of the biopic find Vidya's health a cause of concern with the toll the traveling stress will take on the actress.

Thus, to alleviate their concern, producer Ekta Kapoor has decided to allow Vidya to have her own doctor to call upon whilst touring the country. Playing the central character in the movie -alongside Naseeruddin Shah, Emraan Hashmi and Tusshar Kapoor- any plans of advertising the film would not have been complete without the actress. Hence, if Vidya is to feel even slightly poorly, medical help from the most reputed doctors of the city, where promotions are being held, should be at hand.

The Dirty Picture, which depicts the life of the 80's Southern siren, Silk Smitha, who committed suicide at the peek of her career, hits theatres on December 2nd, this year, on the birth anniversary of Smitha.