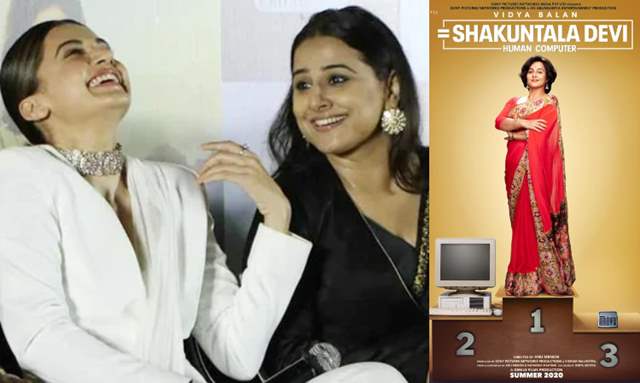 A few days to go for the most awaited film Shakuntala Devi to finally release and is the first-ever film to see a global release on Amazon Prime Video. The film has National-Award winning actress Vidya Balan in the lead role of the 'human computer'. The actress is well known as the Queen of Biopics for successfully delivering the toughest of characters with utter ease.

Vidya’s Mission Mangal co-star Taapsee Pannu has finally watched Shakuntala Devi and she even loved the film. The actress took to her Twitter handle and shared her love for Vidya and her upcoming release.

Taapsee shared her views on the movie in a funny tweet. “Vidya kasam bohot pyaari picture banayi hai (I swear on the goddess of education,it’s a very lovely film you’ve made),” she wrote, playing a pun on Vidya’s name. Taapsee tagged multiple members of the crew as well.

Fans are looking forward to watch the much-anticipated biographical film about 'Shakuntala Devi' who was also known as 'the human-computer' for her astonishing calculation skills.  However, through a digital screening, a few got the chance to watch the film recently.

Tapsee appreciating and admiring the film just holds proof to the fact that the film is surely gonna be worth the wait and is going to be a splendid one! The film will be revolving around the plot of Shakuntala Devi's life story and her achievements. As soon as the calendar flips to 31st July the film will be available to us all!

The upcoming film 'Shakuntala Devi' is directed by Anu Menon and produced by Sony Pictures Networks Productions and Vikram Malhotra. The film also stars Jisshu Sengupta, Sanya Malhotra, and Amit Sadh in prominent roles. Make sure to tune in to Amazon Prime Video to watch the film!

Vidya Balan reveals no Alterations were made to the story of ...